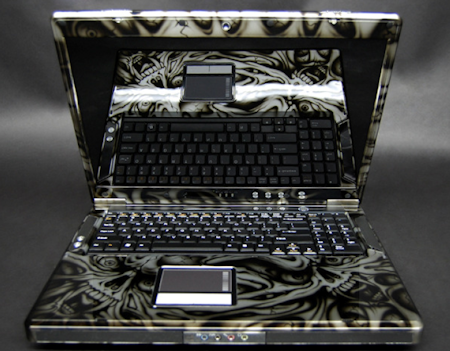 It claims to be the first notebook to squeeze in a ultra performing Intel Core 2 QX9770 processor as well as NVIDIA GeForce 8800M GTX graphics and 4GB of GSkill DDR2 memory. In addition a single 500GB Western Digital Caviar SE16 drive is included as well as a Lite-On 20X DVD+/-RW optical drive. 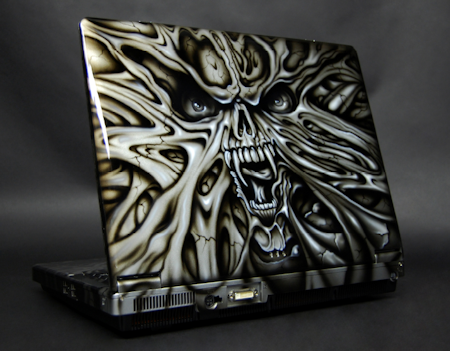 Don't expect anything ultra portable about this notebook as SmoothCreations intended to offer desktop level performance to consumers that need a mobile workstation solution or a gamer who doesn't want to lug around a large PC to LAN parties.

In a default run of 3DMark06, it manages to score 12822 3DMarks, which is obviously going to offer a very solid gaming experience.

This system is designed to bring performance and productivity to the notebook. This beautiful SmoothCreations PC is a creation and a work of art. This Hand painted & custom built for beauty & performance makes this gaming pc unique. The Broodling Notebook is powered by an Intel Extreme 9770 Quad Core and a Diamond Radeon HD 3850 graphics card. As the CEO of SmoothCreations, Jim Saling, puts it, "The Broodling Notebook" was intentionally engineered to offer Desktop performance to the power users that need a mobile workstation solution or a gamer whom doesn't want to lug around a large PC to LAN parties.