The first badge is called simply "AMD GAME!" and will be featured on system that carry a minimum of an Athlon X2 5600+ CPU, ATI Radeon HD 3650 graphics card and motherboard based on AMD's 770 chipset. AMD GAME! platforms give you a system that's balanced and designed for people who want some of the latest and greatest technologies to enjoy cutting-edge games and HD entertainment.* An AMD GAME! PC platform combines AMD's award winning processor, graphics, and chipset technologies to deliver a great gaming experience at a great value. And by allowing evolving game needs to dictate new technology, AMD GAME! systems can keep you at the front end of the technology curve. 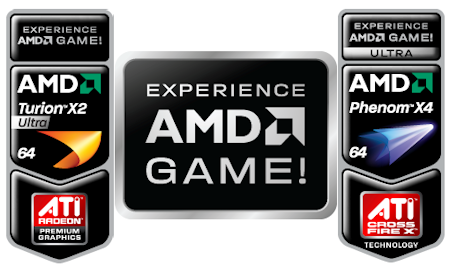 The second badge is called "AMD GAME! ULTRA" and will be featured on system that carry a minimum of an Phenom X4 9500 CPU, ATI Radeon HD 3850 graphics card and also motherboard based on AMD's 770 chipset. AMD GAME! Ultra platforms give you all that and more-with ultra-rich visuals, extreme performance, and scalability for added graphics firepower as you need it. AMD GAME! Ultra delivers The Ultimate Visual Experience with an array of technologies including support for DirectX 10.1 graphics, UVD high definition video acceleration*, and the ability to add multiple graphics processors for accelerated gaming performance.

For most of the people reading TweakTown it won't be of much use to you as you most likely build your own systems or know exactly what you want. However, for all the people out there who don't have an interest in following the tech scene and all its craziness, this is a great idea by AMD.