All NewsBusiness, Financial & LegalCases, Cooling & PSUContests & GiveawaysCPU, APU & ChipsetsDealsDisplays & ProjectorsGamingMotherboardsScience, Space & RoboticsStorageVideo CardsVirtual & Augmented Reality
All ReviewsAll ArticlesAudio, Sound & SpeakersCases, Cooling & PSUCPUs, Chipsets & SoCsComputer SystemsDisplays & ProjectorsGamingMotherboardsNetworkingPeripheralsStorageVideo Cards
GuidesGamingAsk the ExpertsNewsletterAboutForums
RTX 4090Windows 11Halo InfiniteBattlefield 2042Elon MuskGTA 6RTX 3080HDMI 2.1
Just as ASUS issues a statement on its website stating that Gigabyte made false claims to media at a press event held last week regarding some of its new technology, the ASUS EPU vs. Gigabyte DES power saving wars battle on. I think personally we are in for a good show as both motherboard giants battle it out. 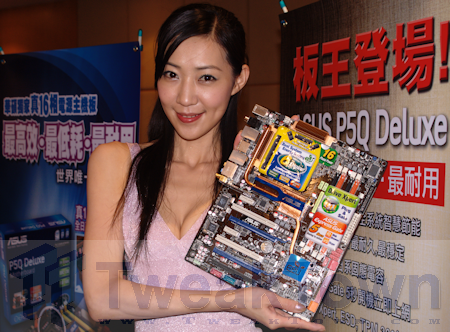 (Models were also in attendance...)
At its press event in Taipei this afternoon, ASUS demonstrated two Intel X48 based motherboards using the exact same components and software (and a couple of models that went down rather well with the men in the crowd). There are no prizes for guessing which other brand board was involved in the exercise. Of course, it was Gigabyte's X48-DQ6 (DDR2) and the ASUS P5E Deluxe (also DDR2). ASUS tested EPU and DES in a live demonstration to attending press and the results surprised us a little. 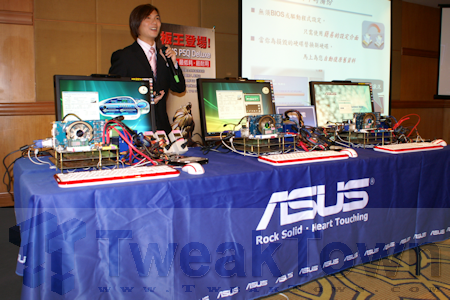 (ASUS rep giving presentation in Chinese)
In our first testing of EPU and DES, DES came out trumps by quite a margin. When we move up to X48, ASUS is claiming victory over Gigabyte today. We can confirm that both systems were using the exact same hardware and software and as you'll see in just a moment - EPU manages lower wattage at idle at 104 watts (does that provide us with an 80.23% energy saving?) while the X48 DES enabled motherboard had a power reading of 115 watts. While all the hardware was the same on both systems, the DES based system had a CPU core voltage which moved around 1 volt while the ASUS board was steady at 0.992 volts. Also keep in mind that the memory speed on the Gigabyte board was 800MHz DDR while on the ASUS its memory was clocked slower at 722MHz DDR - however, that probably wouldn't have made too much difference but it's something to keep in mind anyway. 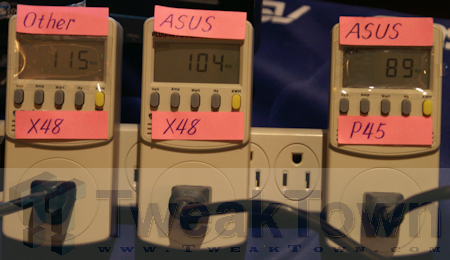 (The power consumption monitors telling a story...)
Surprised as to why this may be the case as a result of our own testing in our labs, we asked ASUS how they managed to beat Gigabyte and the answer wasn't as technical as I thought it might be. We are assuming through a fast flow of changes to EPU by the engineers at ASUS, EPU is able to turn off hard drives connected to the motherboard (except the master C drive) after a period of idle time, around 15 minutes we were told - hence why three hard drives were connected to the system for the demo and for the eyes of the attending media. 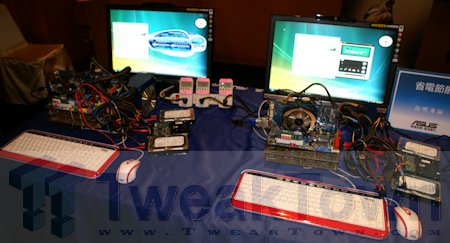 (The test systems on display for all to see...)
Gigabyte DES in its current state and as far as we know, doesn't do the same. The chap from ASUS even mentioned that when you first turn on the systems, idle power consumption would be about the same. We wanted to reboot the systems or unplug the two extra hard drives from the DES based system and see what would happen, but that might have not gone down too well, during their presentation. 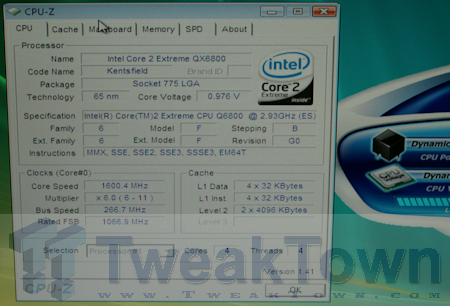 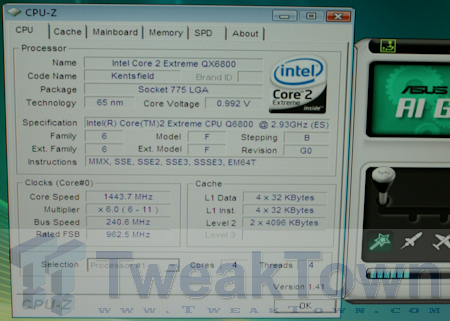 (ASUS EPU CPU-Z shot)
While we didn't have a lot of time to play around with the boards, EPU shutting down idle drives does have an element of goodness about it. Keep in mind in Vista that you can use Windows power saving settings to automatically turn off drives after a certain time. However, that is when you walk away from your machine and when most of the system enters an idle state. This is nice in that you can keep working and unused drives will be shut down or put into a deep sleep saving on your power bill - we just hope they wake up when they are needed.

I don't know if it is just me but I think things are about to get a whole lot more interesting over the next few weeks.