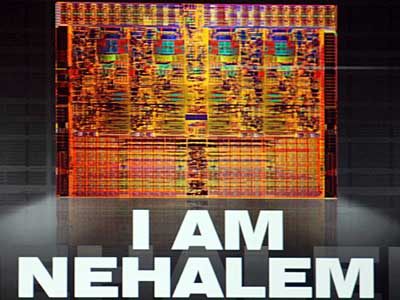 His argument says that on Intel based platforms, it's rather difficult to fully utilize modern high-speed memory such as DDR3-2000. If you wanted to fully utilize it and obtain the 32GB/s theoretical maximum bandwidth, your CPU would need to be running an FSB of 4000MHz. This is of course is not possible as you'd need a multiplier setting of 1x or 0.5x - let alone not mentioning the system being able to handle such an insane bus speed.

Theo says Intel Nehalem architecture uses 64-bit memory controllers that are directly connected within the CPU silicon, eliminating those "FSB brakes". He goes on to say that you could expect bandwidth utilization jumps from current 50-60% to 90%.

Industry sources now indicated that the mainstream Nehalem processor code-named Lynnfield will be able to almost double the memory bandwidth - to about 18.5-20.1 GB/s when DDR3-1333 modules are used.

If you own or plan to buy DDR3 memory, prepare yourself mentally and financially for Nehalem. Intel is currently preparing two different desktop parts: Bloomfield will become the new Core Extreme and feature a triple-DDR3 controller. Using three or six DDR3-1333 modules you should be able to achieve 30 GB/s, while Lynnfield will arrive in Q1 2009 and offer a regular dual-channel DDR3-1333 controller.

So, keep the modules, and wait for their time. It will come.