Although it ended on a bit of a sour note thanks to one certain American journalist, on the whole the event was interesting and had a good vibe throughout.

Winston Chim from CPU3D in the UK was also at the event and not only does he know how to drink rather well (from what I can remember) but he offers his thoughts on the event with a stack of photos. 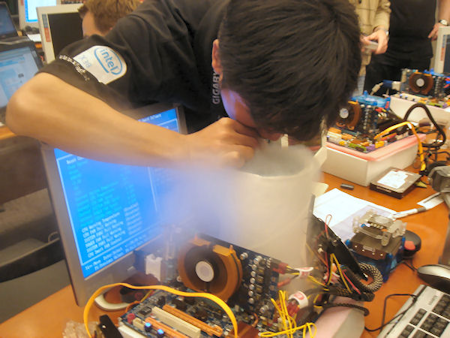 The Gigabyte Plug-Fest event is one of the best I've attended to date. We actually got to test the P45 motherboards hands on, rather than just sitting through a conference speech. It's a great idea, as it allows us to report any bugs and give Gigabyte our feedback before its release, and final product launch. The event was a great chance to meet up with all the members at Gigabyte ... including the Vice President, the R&D team and of course the marketing personnel.

During the closing ceremony, Gigabyte's Rockson Chiang demonstrated in real-time, the DES (Dynamic Energy Saver) on a live system. They compare it with one of their competitor's motherboard ... and highlighted that their DES feature actually works better than their competitors.