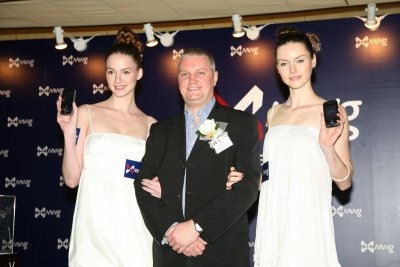 The two new models launched were the Atom V and Zinc II. From Expansys in the UK, the updated Zinc II will set you back a steep 449.95 (inc tax) but it looks to have the features to match the price tag.

All those pennies will get you a Samsung 500MHz processor, 256MB Flash ROM and 64MB RAM, UMTS Tri-band, GSM Quad-band and HSDPA 3.6 Mbps for fast downloading, Bluetooth v2.0 and 802.11b/g WLAN, 2.8" TFT QVGA (Touch Screen) as well as a slide out QWERTY keyboard for fast typing. It is listed as being due on Sunday 11th May.

The Atom V is the cheaper version costing 399.95 (inc tax) but does not lack on the features front at all. With this model you'll get a slightly faster clocked Intel XScale PXA270 520MHz processor, same amount of memory but it sees a newer HSDPA 7.2Mbps chip being used - if you can find a network to take advantage of those huge mobile download speeds. It also comes with FM radio and GPS built-in. Over at Expansys in the UK it is listed as being in stock right now.

Our review samples are on the way and we'll take a good close look at them just as soon as we can!