NVIDIA has had control of the high-end mobile graphics segment for quite a while, but some details and pictures of a (what looks to be) brutal piece of work from the AMD/ATI crew have shown up on the web and it may just get them right back into the swing of things in this sector. 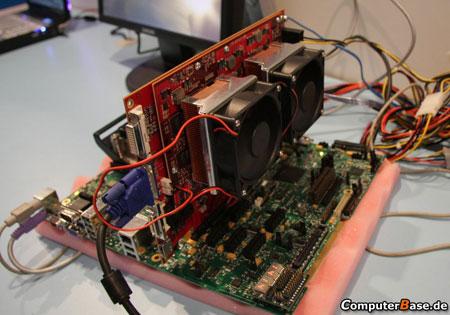 First spotted over at German site ComputerBase appears to be a pre-production/prototype sample of the upcoming "Mobility Radeon HD 3870 X2"; a fairly big PCB with two RV670 GPUs, sitting in an early revision Montevina platform. It is however likely that if AMD plans to mass-produce a high-end Mobility dual-GPU solution for notebooks, they'll end up moving over to linked MXM modules like what ASUS did with the world's first tri-core card; "Trinity".
Newsletter Subscription