The "gun metal" metallic finish is a marketing ploy no doubt to glorify the standard metal tones without a colored amalgam adding to the cost. The obvious link to weapons of war means it has to be geared for gamers, and high-end enthusiasts who constantly battle their machine to greater heights of performance. The Universal cooler fits on both Intel and AMD CPU sockets. 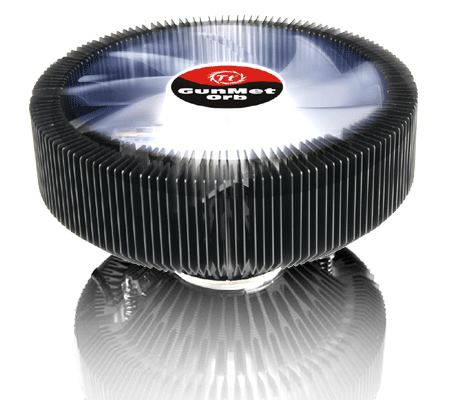 The website claims it has a "Tt Patented Radian crotched fin design", but looking at the almost futuristic helicopter radial fin design, I'm finding it difficult to relate to the crotched part of the statement.

However, the 140 aluminum fins are probably more than suitable in providing the necessary cooling. It is also touted to have a 120mm, 17dB fan which is pretty silent compared to other fans out there, and this in my book is a major selling point. There is nothing worse than a noisy fan.

Check out the details here to learn more about.
Newsletter Subscription