Merging with Microsoft could substantially disrupt Activision's revenues and/or profitability due to Xbox Game Pass integration. 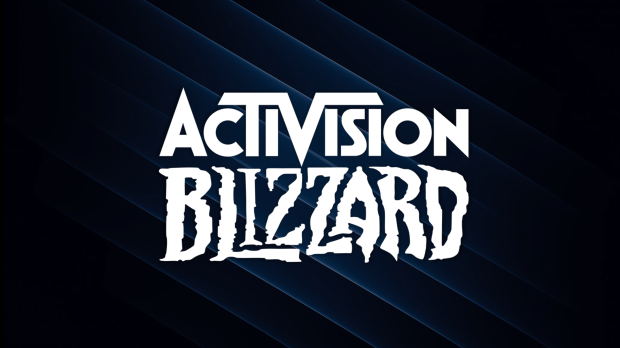 Microsoft has been very clear on its motivations for wanting to buy Activision Blizzard King for $68.7 billion. The main rationale behind the deal is to bolster Xbox's billion-dollar digital empire through mobile gaming, substantial value boosts in Xbox Game Pass subscriptions, increased revenues from more service-based games and content, and substantially increased monetization potential through the publisher's incredibly popular franchises.

While the bulk of Activision Blizzard King relies heavily on monetization across a fleet of digital-based billion-dollar IPs like Candy Crush, Overwatch, and Warcraft, the Activision segment in particular is still quite reliant on full game sales driven primarily by its annualized Call of Duty franchise.

If Activision were to merge with Microsoft, then there's a very good chance that Activision's total full game sales could be negatively impacted and/or reduced, which could affect the company's bottom line earnings. 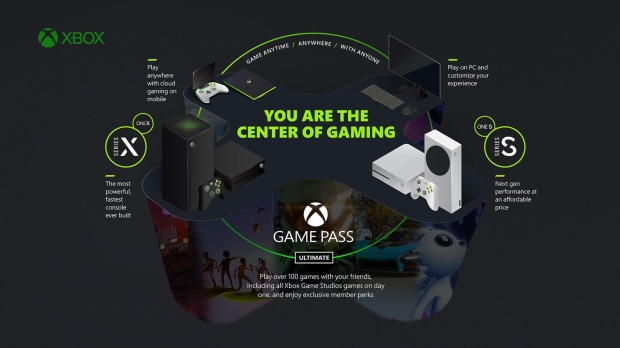 Game Pass is the central reason for this assessment. Activision itself understands that including first-party games on services like Game Pass could disrupt its business and "cannibalize" sales of its games, including sales of its blockbuster Call of Duty franchise, of which the publisher very much depends on.

In fact, Microsoft has said that Activision has absolutely no plans to release any of its major first-party games on subscription services if the merger doesn't go through.

In short, Activision wants consumers to buy its games at full price, not pay a monthly or yearly free to access their games on an all-you-can-play basis.

Activision is concerned that participation in subscription services could impact its (REDACTED) and would lead to brand dilution and cannibalizations of buy-to-play sales (especially of new releases). This reflects Activision's view that even if the subscription business model were to grow, the (REDACTED). This has been a fundamental impediment to publishers more generally agreeing to place their content on subscription services, a stance which is not going to change in the future.

Microsoft has made it clear that it intends to release Activision-Blizzard games on Xbox Game Pass for both consoles and PC, with major franchises like Call of Duty, Diablo, and Overwatch all benefiting from "day and date" releases--the very business mechanism that has prevented Activision from embracing the subscription model.

Other publishers like Take-Two Interactive have been critical of the Xbox Game Pass day-and-date release structure, with Take-Two CEO Strauss Zelnick saying that it is a "lost opportunity for publishers."

Here's what Microsoft says about the merger as it pertains to consumer welfare on Page 6, section (c):

The Merger's impact on multi-game subscription services is yet another example of its pro-competitive nature. A key benefit of the Merger for gamers lies in Xbox's plan to make Activision content available on Game Pass on the day of the game's release (i.e., "day and date").

The difference between the two scenarios is stark. With the Merger, Activision content will be available on at least one subscription service day and date, without the Merger, on none.

This matters from a consumer welfare perspective, because the more content consumers can access through subscription services, the lower the average prices of individual games. Absent the Merger, every consumer who wants to play Call of Duty or another Activision title would need to purchase the game at full price.

It's possible that releasing games day and date on Xbox Game Pass would not only significantly affect retail revenues, which have been dwindling for quite some time (see below), but also digital game sales made on PlayStation, Xbox, and PC.

To really understand this we need to take a closer look at some figures. 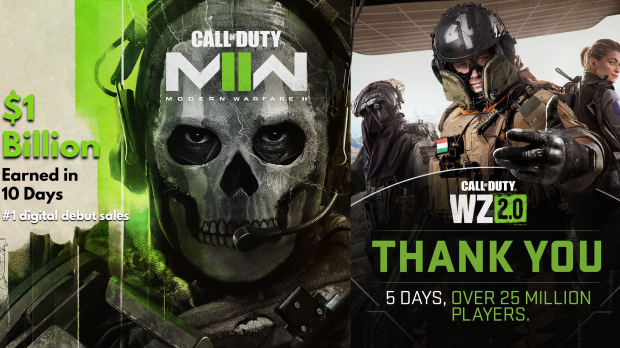 Modern Warfare 2 generated $1 billion from game sales in 10 days, which probably wouldn't have happened if the game was available day on on Xbox Game Pass.

The number of franchise game sales is likely to have climbed significantly due to Modern Warfare 2's success. Activision has not released actual game sales unit figures for MW2, but we do know the shooter made over $1 billion in revenues in 10 days time on game sales alone. It's further worth noting that Modern Warfare 2's base price was $69.99 on both Gen8 and Gen9 consoles. 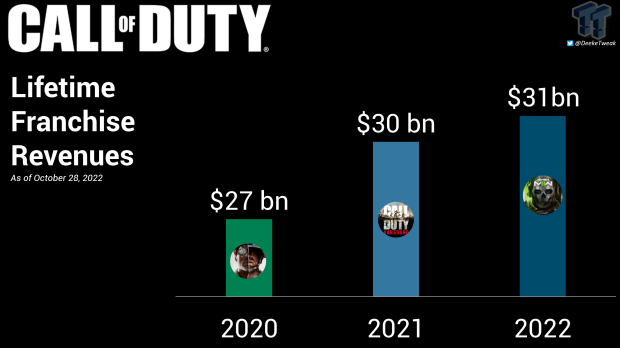 Modern Warfare 2 sold so many copies that total franchise earnings rose to $31 billion.

It's highly unlikely that kind of revenue would be generated if the game was released day-and-date on Xbox Game Pass, especially given the service offers substantial promotions that allow gamers to join for $1 for an entire month.

It's also worth noting that Call of Duty is the best-selling game on both Xbox and PlayStation. Will Xbox players still buy games at full price if they can subscribe to Xbox Game Pass and receive access to these games? 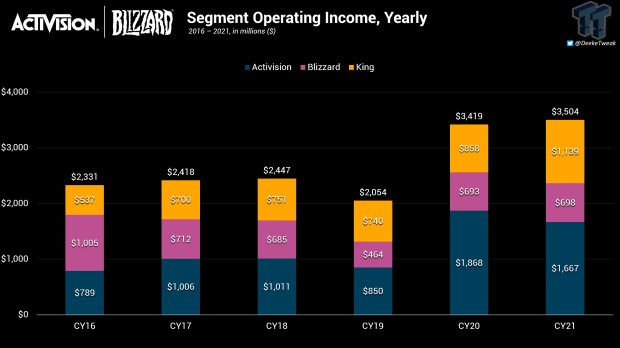 Activision is the largest contributor to total company operating income.

Data confirms that Call of Duty is Activision Blizzard King's most powerful franchise.

Some would argue that King makes more than Activision, and while that's true on 9-month quarterly basis, Call of Duty's release in Q4 is powerful enough to skyrocket Activision's earnings and beat all other segments, including King, in full-year earnings. 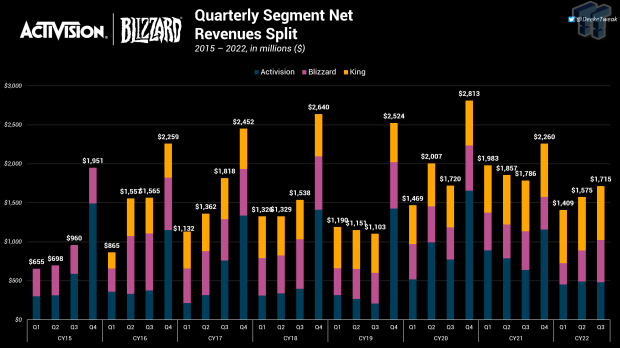 Activision also delivers the lion's share of net revenues on a yearly basis, primarily driven by Call of Duty.

This Q4 surge is responsible for continued growth of the publisher's business. King is the most reliable earner quarter-over-quarter, and Blizzard was previously more sporadic and erratic but has stabilized with the releases of Overwatch 2 and Diablo Immortal. Activision, on the other hand, conquers the other two during the holiday periods when Call of Duty games are released.

The relationship to full game sales and monetization remains clear. 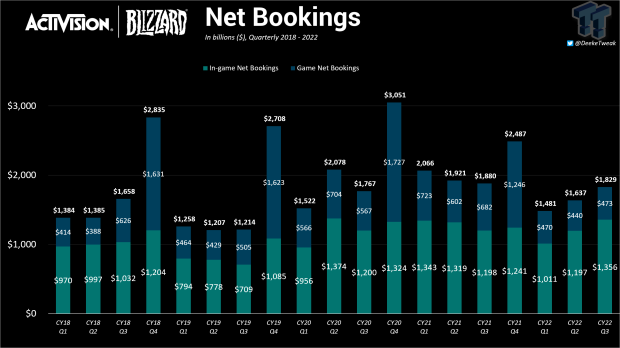 Based on these trends, it appears that Call of Duty is a significant driver for game net bookings during the Q4 period and for the full year itself. Not only that, but game net bookings, or game sales made via retail and digital channels, are still a meaningful contributor to total net bookings and thus total earnings and profits.

This seems to indicate that Call of Duty full game sales are an important part of Activision-Blizzard's total earnings, and that including these titles on a service like Xbox Game Pass could significantly disrupt the publisher's current earnings, and, potentially, its profitability.

Data also suggests that Microsoft has an even greater reason to keep shipping Call of Duty games on PlayStation lest the company miss out on millions of game sales per year. 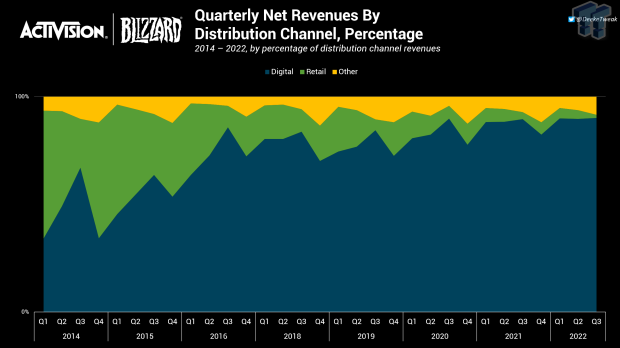 Retail revenues have been dwindling for some time, whereas digital remains strong.