Sony's PlayStation 5 has shipped 25 million units since releasing in 2020, but the console is still shipping slower than the PlayStation 4. That should change this year. 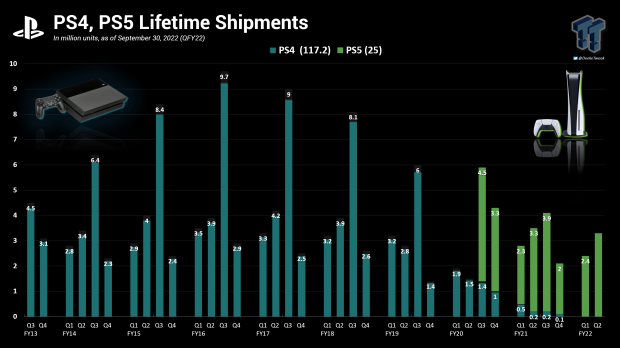 Today Sony announced its Q2 2022 earnings report, revealing tons of new info about the PlayStation business. According to the figures, the PlayStation 5 duo of consoles has shipped 25 million units to date. Compared to the PS4, the PS5 is actually about 4 million units short of being its predecessor's rapid pace.

In its first 8 quarters the PlayStation 4 had shipped 29.4 million units worldwide, beating the PS5's current numbers by some 4.4 million units. Sony is eager to fill the gap between the two generations and is actually making PS5 consoles faster than anticipated--the company produced 6.5 million PlayStation 5's during the Q2 period from July to September 2022.

The goal is to have shipped 18 million PlayStation 5 consoles throughout this fiscal year. This would technically beat the PS4's shipments throughout a comparative period--the PS4 shipped 17.7 million consoles in its third fiscal year or 10 quarters--however the PS4 is still expected to stay on top.

That being said, Sony is making high revenues from its hardware business, with Q2 numbers hitting $1.296 billion thanks to the growing availability of PlayStation 5 consoles. Also remember that the PS5 is now profitable for Sony's video games division, and that the company has raised the retail price tag of all PS5 units in most worldwide markets except for North America and the United States.