NASA and the European Space Agency (ESA) have taken to their respective channels to share an incredible image of the galaxy pair called VV 191. Researchers combined data from Webb and Hubble and were able to trace light that was emitted by the large white, elliptical galaxy seen on the left of the above image through the spiral galaxy on the right. The results were that researchers were able to identify the effects of interstellar dust throughout the spiral galaxy.

Webb's near-infrared data and Hubble's visible light data revealed to researchers the long, extremely dusty spiral arms in increased detail, which makes them appear to be overlapping with the elliptical galaxy's bulge in the center. Despite the image making the galaxies look like they are next to each other, they actually aren't overlapping at all.

"Webb's near-infrared data also show us the galaxy's longer, extremely dusty spiral arms in far more detail, giving the arms an appearance of overlapping with the central bulge of the bright white elliptical galaxy on the left. Although the two foreground galaxies are relatively close astronomically speaking, they are not actively interacting.

VV 191 is the latest addition to a small number of galaxies that helps researchers like us directly compare the properties of galactic dust. This target was selected from nearly 2,000 superimposed galaxy pairs identified by Galaxy Zoo citizen science volunteers.

"Understanding where dust is present in galaxies is important, because dust changes the brightness and colors that appear in images of the galaxies. Dust grains are partially responsible for the formation of new stars and planets, so we are always seeking to identify their presence for further studies.

"The image holds a second discovery that's easier to overlook. Examine the white elliptical galaxy at left. A faint red arc appears in the inset at 10 o'clock. This is a very distant galaxy whose light is bent by the gravity of the elliptical foreground galaxy - and its appearance is duplicated. The stretched red arc is warped where it reappears - as a dot - at 4 o'clock.

These images of the lensed galaxy are so faint and so red that they went unrecognized in Hubble data, but are unmistakable in Webb's near-infrared image. Simulations of gravitationally lensed galaxies like this help us reconstruct how much mass is in individual stars, along with how much dark matter is in the core of this galaxy. 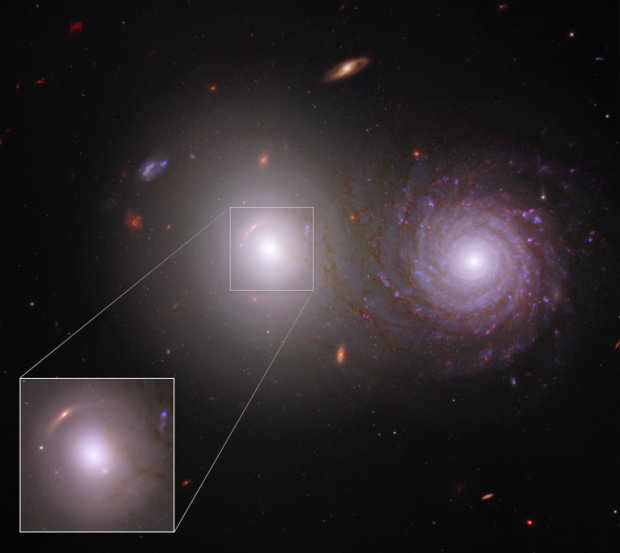 "Like many Webb images, this image of VV 191 shows additional galaxies deeper and deeper in the background. Two patchy spirals to the upper left of the elliptical galaxy have similar apparent sizes, but show up in very different colors. One is likely very dusty and the other very far away, but we - or other astronomers - need to obtain data known as spectra to determine which is which, writes NASA"