The new CapFrameX 1.6.9 supports AMD's new Zen 4 and Intel's new Raptor Lake CPUs, as well,as Intel's upcoming Arc A-Series GPUs, and as usual it fixes the usual bugs and issues in previous versions of CapFrameX. The developer has also added new websocket URLs, where you can access the items of the sensor service -- useful for people who want to log specific sensors over longer periods of time, without needing to do a huge benchmark.

CapFrameX 1.6.9 also has new legend scaling for comparisons, where there's now the option of scaling the size of the charge legend by either 1.5x or 2x, where the team has provided an example of this comparing the AMD Ryzen 7 5800X processor running 720p and 1440p. 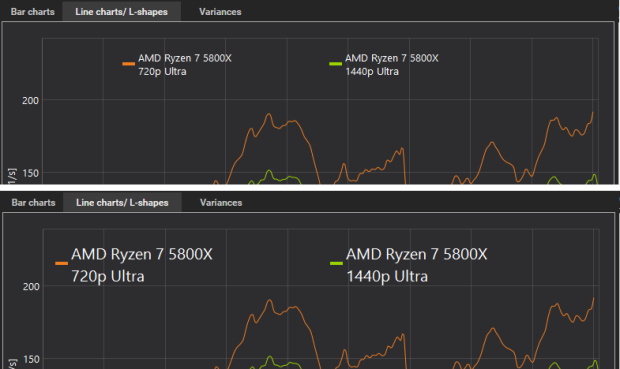 The new update also sees reworked stuttering calculation and visualization, with CapFrameX 1.6.9 and its stuttering analysis providing an awesome way of seeing how many spiking frames you experienced during your benchmark run. In previous verisons of CapFrameX, the formula used to calcuate this was taking the average fame time and multiplying it by the configuratble stuttering factor. If any of the frames were higher than that, they were counted as a stuttering frame.

But users requested that they wanted to see the actual threshold for the stuttering inside of the frame time chart, the team recognized the potential flaw in doing this, so they used the average frame time, adding the "threshold logically was just a straight line at a fixed ms value".

The team continued, explaining: "The problem with this is that it really only works well if you have fairly even frame times across the run. If your run includes a section with generally lower FPS and also a section with generally higher FPS, the stuttering threshold isn't appropriate for both of the scenarios because drawing a straight line at the average frametimes of the entire run, the range between the stuttering threshold and the first section will be too small and the range between it and the second section will be too big.

The solution to this was to no longer use the average frame times for the calculation but instead using the already existing moving average. Every frame now gets compared with the value of the moving average at that point multiplied by the stuttering factor. This way, the stuttering threshold dynamically adapts to the surrounding frame times and does a better job at detecting when there really is a frame time that is much higher than the frame times around that point instead of just the overall average.

As the stuttering chart also includes the configurable "Low FPS" value(frame times that are below stuttering but still higher than the set value) this value was also added to the frame time chart.

You can toggle the visibility of these two values in the options menu of the stuttering tab. This is how it looks:" 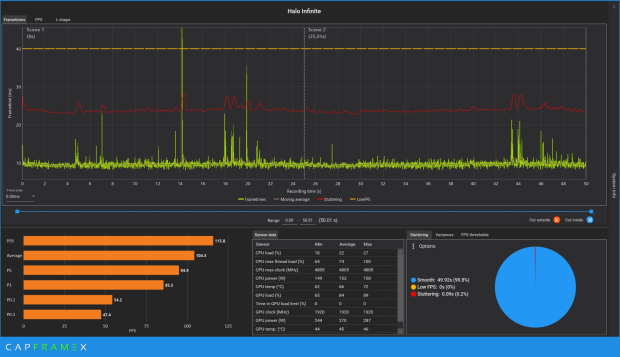 You can read more about, and download the new version of CapFrameX 1.6.9 right here.