An artificial intelligence system that has recently caught the spotlight for numerous reasons has been asked to produce images of real-life iconic cartoon characters.

The artificial intelligence that was requested to produce the images is called Midjourney, which is an AI program that is designed to produce images from textual descriptions. The tool recently went into open beta in July and has since grown in popularity as users are able to enter descriptions of whatever they can think of to produce a completely unique image. Midjourney is extremely impressive, as I have personally used it to generate several wallpaper images for my desktop.

The AI system is capable of recognizing specific words such as 4K, real-life, noir, cartoon, high detail, and more. Using these words and more, you can write a prompt such as; Portrait image of Rick Sanchez from Rick and Morty in real life. Taking this principle of being able to request basically whatever you want, one Midjourney user decided to create an award-winning image and enter it into an art competition undisclosed of its creation process.

Jason Allen, a board game director, spent weeks fine-tuning the prompt that he was entering into Midjourney and eventually generated three images that he was happy with.

Allen entered the AI-generated images in the Digital Art category at Colorado State Fair under his own name along with "via Midjourney". Allen won first place and used the opportunity to make a statement about AI art being accepted among the community, saying, "Is it common for artists to explain their process just for the sake of clarification? Are they judging the art or the method by which it was created?". 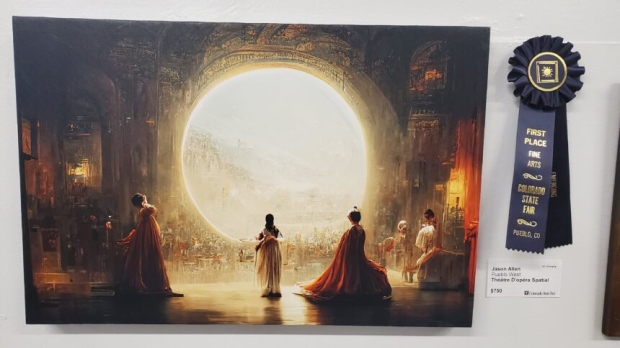 The winning of the art competition has since reached social media, where it has sparked a major divide, with many users criticizing Allen for "cheating" by using an AI to produce the image. Many Twitter users dismissed Allen's claims of "fine-tuning" the AI-generated images for multiple weeks, and some other users pointed out that the AI system used a bunch of images from other artists to generate this image, essentially making it a mosaic piece.

The opposing side of the debate claims that these images wouldn't have been created without extensive human work (hours of photoshop), and that the process of refining the prompt that he entered into Midjourney to produce the image.