A study on the merger titled "The First Short GRB Millimeter Afterglow: The Wide-Angled Jet of the Extremely Energetic SGRB 211106A" has been accepted for publication in the Astrophysical Journal Letters. 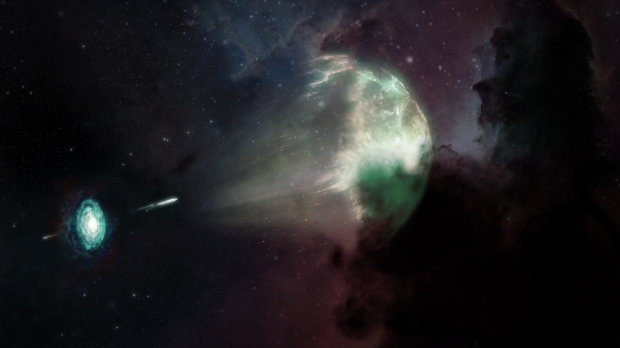 Researchers led by Northwestern University and Radboud University have recorded one of the most high-energy, short-duration gamma-ray bursts (GRBs) ever, exploding from the merger of a neutron star and another nearby star. Using the Atacama Large Millimeter/submillimeter Array (ALMA), the largest radio telescope in the world, the researchers produced a time-lapse of the GRB produced by the merger, generating a large flash of light radiation.

"This short gamma-ray burst was the first time we tried to observe such an event with ALMA. Afterglows for short bursts are very difficult to come by, so it was spectacular to catch this event shining so brightly. After many years observing these bursts, this surprising discovery opens up a new area of study, as it motivates us to observe many more of these with ALMA and other telescope arrays in the future," said Northwestern's Wen-fai Fong, principal investigator of the ALMA program.

The GRB is dubbed GRB 211106A and produced one of the most luminous afterglows on record. These short gamma ray bursts (SGRBs) last a fraction of a second and occur when binary star systems containing a neutron star collapse. They are believed to create the heaviest elements in the Universe, like platinum and gold. The merger that produced it was initially observed by NASA's Neil Gehrels Swift Observatory using X-rays, but it could not detect the host galaxy as the burst was so faint and distant.

"Short-duration GRB afterglows are very luminous and energetic. But these explosions take place in distant galaxies which means the light from them can be quite faint for our telescopes on Earth. Before ALMA, millimeter telescopes were not sensitive enough to detect these afterglows," said Tanmoy Laskar, who will soon commence work as an Assistant Professor of Physics and Astronomy at the University of Utah.