TransPod, a Canadian-French startup, has unveiled the design for its new hyperloop vehicle.

TransPod is building the TransPod Line, its "ultra-high-speed ground transportation system" that will utilize the newly revealed, fully electric FluxJet vehicle. According to TransPod, the FluxJet makes use of breakthroughs in contactless power transmission and a new field of physics known as "veillance flux," enabling it to cruise at speeds of over 1000 kilometers (621 miles) per hour along an elevated guideway. It will be capable of a top speed of up to 1,200 kilometers (746 miles) per hour, or about Mach 0.97, just shy of the speed of sound.

The company has secured $550 million in financing and has announced an $18 billion infrastructure project that will connect the cities of Calgary and Edmonton in Canada. The project will allow passengers to travel between the two cities in 45 minutes. Once completed, the TransPod Line is expected to cost passengers 44 percent less than a plane ticket while being able to travel faster and reduce carbon dioxide emissions by 636,000 tonnes per year. The FluxJet will also exceed the speed of other high-speed trains three-fold. 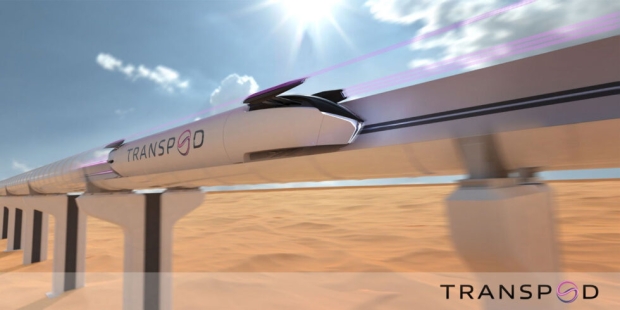 "This milestone is a major leap forward. The FluxJet is at a nexus of scientific research, industrial development, and massive infrastructure to address passengers' needs and reduce our dependence on fossil-fuel-heavy jets and highways," said Ryan Janzen, the co-founder and CTO of TransPod.

"TransPod completely changes the game with ultra high-speed, zero-emission passenger travel and freight transportation between major gateway cities. It is time for bold action from our policymakers, investors, and operators to support the commercialization of made-in-Canada innovations like TransPod, to win in the multi-trillion dollar global innovation economy," said Yung Wu, CEO of MaRS Discovery District.