Just imagine... you've ordered yourself an expensive, new, super-fast flagship NVIDIA GeForce RTX 3090 Ti graphics card and it arrives in the mail... but there's no graphics card inside. 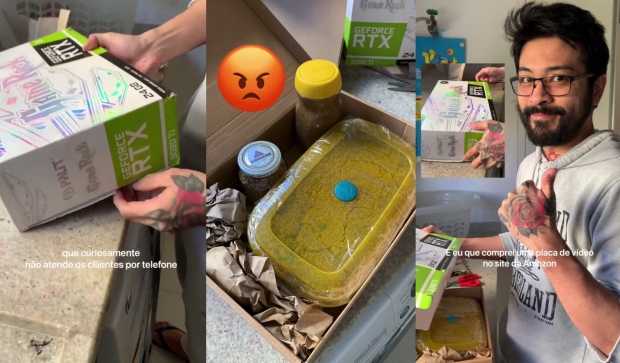 This is what happened to a Brazilian man who ordered himself a Palit GeForce RTX 3090 Ti GameRock graphics card, but instead found himself with sand instead. In a not-so-funny coincidence, AIB partners did reportedly tell NVIDIA to "pound sand" over Turing and Ampere stocks sitting in warehouses ahead of the Ada Lovelace GPU launch.

Brazilian gamer Mauricio Takeda ordered a Palit GeForce RTX 3090 Ti GameRock graphics card, opening it to find pots of sand. He did notice that the weight of the package was weird once he received it, asking his wife to record it... which is how we have these pictures. It's pretty ridiculous, with Takeda saying he's usually a calm person but wasn't after he saw this.

Takeda ordered his GPU from Amazon during the Prime Days sales, but the pots of sand ended up costing him around $2637.