NVIDIA is in a pickle... they have got their AIB partners with warehouses filled with older-gen Turing, and even Pascal-based GeForce RTX series graphics cards and they have forced NVIDIA's hand into helping them get rid of the older-gen cards before the launch of the next-gen cards in a few months.

In a new video, Tom @ Moore's Law is Dead says that his AIB sources are pissed over the situation, and are threatening their next-gen Ada Lovelace GPU allocation -- so, effectively they're willing to give up how many Ada Lovelace GPU dies to them over another AIB if NVIDIA don't help them get rid of old stock -- which is a big, big move.

The AIB sources explained: "This month we told NVIDIA to go pound sound. We don't want to buy anymore Ampere or Turing stock until we liquidate our existing warehouses. At this point we're even willing to risk Lovelace allocation if they threaten us". They in that situation, being NVIDIA.

"NVIDIA underestimated how desperate we were getting, but no more. They're finally working with us on solutions to clear as much stock as possible before Lovelace launches in October. BTW - the overwhelming majority of Used mining stock hasn't even hit the west yet. We need to get rid of these New cards NOW".

Another source told Tom: "Well, over here (ASIA) miners are definitely selling most of their stock off. I'd expect those cards to start flooding the west within weeks".

You can't be missing out on that AD102-based goodness for the next-gen GeForce RTX 4090 graphics card... but you can if you're only going to get a handful anyway, and have warehouses filled with older-gen GeForce products. But even there... that's just the tide going out, and the larger tsunami behind that is that the western markets are about to be filled with used mining cards. 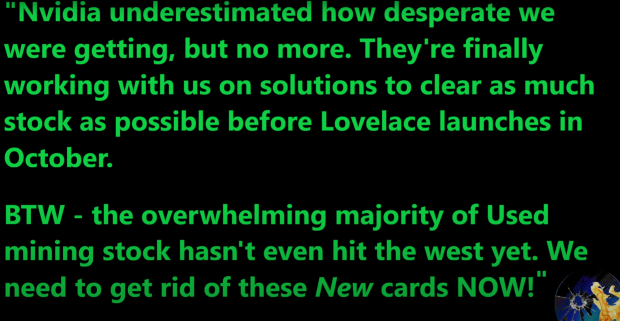 The second that happens, Tom says that we're to expect GeForce RTX 3080 graphics cards for $500... a couple of hundred dollars cheaper than they are today, and that's with NVIDIA pulling the prices down as it is. The GPU market has stabilized massively in the last few months, but now there's about to be a massive over-supply problem.

Something has to give... and it's going to be real interesting to see how this plays out. NVIDIA might absolutely have the high-end graphics card market completely dominated, but at what cost to AIB partners this time around. We're going to see the second hand markets filled with graphics cards, in the middle of massive economic turmoil worldwide, as we lead right into the launch of NVIDIA's best GeForce graphics card ever.

What a time to be alive.