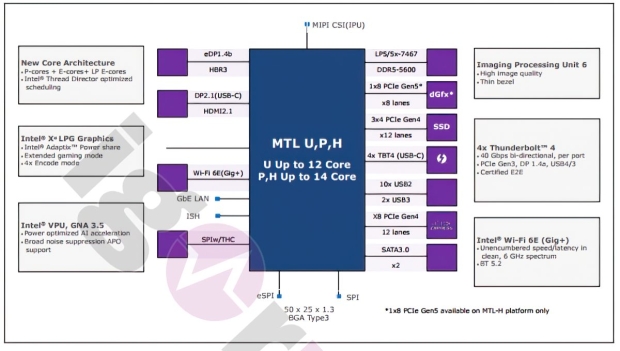 The upcoming Intel 14th Gen Core "Meteor Lake" CPUs will be the first chiplet-style CPU from Intel, and made one the new Intel 4 process (rebranded Intel 7nm process node). Intel will have a CPU + GPU on the Compute Tile, an I/O Tile, and an SoC Tile. The mobile versions of Meteor Lake will have 3 product series: H, P, and U, all in their own power segments.

In new details from Igor's Lab has now appeared in the form of a platform overview diagram for Intel's new 14th Gen Core "Meteor Late" CPUs in mobile form. We can see here that Intel will have P-cores, E-cores, and new LP E-cores (LP could mean Low Power Efficient Cores) on the mobile Meteor Lake processors. Intel will have Xe LPG graphics, which will use Intel Adaptix Power share, with "extended gaming mode" for future Meteor Lake-powered gaming laptops.

Intel will offer up to 12 cores on its Meteor Lake-U series CPUs, and up to 14 cores on both the P and H series Meteor Lake CPU offerings. There are 8 lanes of PCIe 5.0 here, support for DDR5-5600 (and for LPDDR5X-7467) memory, Thunderbolt 4 support, and 12 lanes of PCIe 4.0. Intel's new Meteor Lake mobile CPUs will offer support for up to 96GB of DDR5 standard memory, and up to 64GB for the LPDDR5X memory standard. 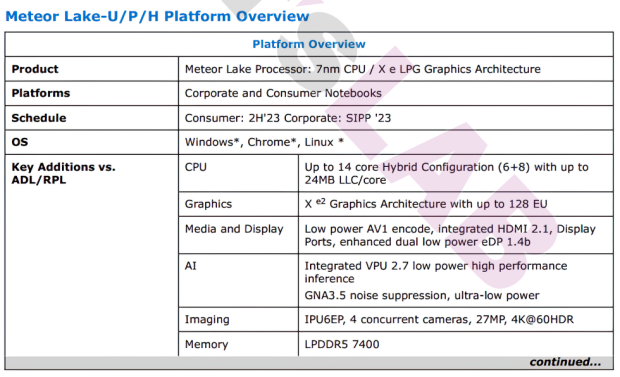 Igor Lab's new leaks tease a new Intel Xe-LPG graphics architecture, which according to the above overview, is based on Xe². The upcoming Meteor Lake (MTL) H/P/U integrated GPUs will pack up to 128 Execution Units (128 EUs) but we don't know if this will be a next-gen GPU -- the upcoming Battlemage GPU architecture -- or a new, lower-power version of Alchemist.