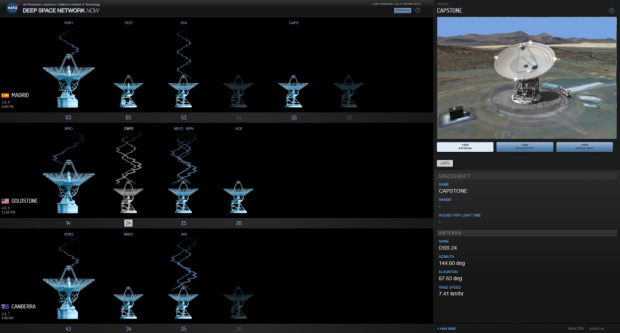 The space agency revealed the news via its blog, where it wrote on July 5 that the spacecraft was unable to communicate with the Deep Space Network while it was on its journey to the moon. The spacecraft is relatively small, but will provide very important data on the moon, which will be used by NASA researchers to inform decisions leading up to humans revisiting the lunar surface.

NASA provided an update on the spacecraft on July 5 and wrote that its health is in good shape and that it's been in partial communication with ground systems. From the partial contact, mission operators were able to determine the speed and position of CAPSTONE, but due to the choppy communication, the spacecraft's first maneuver had to be delayed.

On July 6, NASA took to its blog to announce it had re-established contact with CAPSTONE, and from the data, the space agency has received, the spacecraft still remains in good health, and it has already deployed its solar array to charge its battery in preparation for its coming maneuver.

NASA writes that the agency is planning on conducting the spacecraft's first maneuver on July 7, which will take CAPSTONE into its intended destination of an elongated lunar orbit. CAPSTONE will enter a never-before-flown orbit where the small spacecraft will fly within 1,000 miles of the moon's North Pole, as well as 43,500 miles from the South Pole at its most distant point. CAPSTONE is expected to arrive in its lunar orbit on November 13.

Notably, CAPSTONE also has new technologies that will be tested during its orbit of the moon, and one of those technologies is the Cislunar Autonomous Positioning System, which is spacecraft-to-spacecraft communication and navigation system that, if proven to be effective, will allow for spacecrafts to locate other spacecrafts and rovers without any data from Earth.