A fresh new rumor on AMD's next-gen RDNA 3 GPU architecture has floated up into the rumor mill, with AMD software engineers pushing out new patches for the new GFX11 architecture -- otherwise known as RDNA 3. 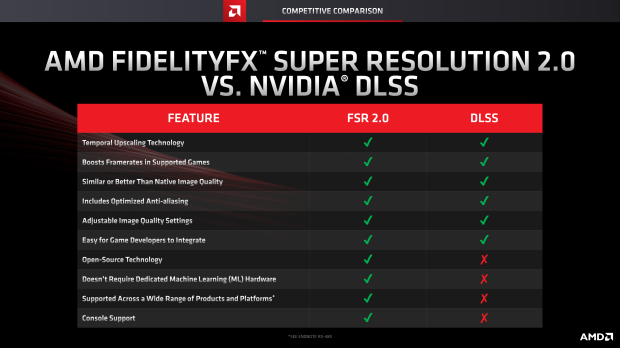 The new patch teases AMD is working on its own instructions that can operate on matrixes, with support for advanced artificial intelligence algorithms, to super-power their super-resolution technologies on RDNA 3-based graphics cards, spotted by @0x22h on Twitter. Effectively, this would be like Tensor cores on an NVIDIA GPU, hardware-based assistance for DLSS.

AMDGPU is a backend for AMD GPUs for LLVM compiler library, which gets updated by AMD employees, and if you're keen-eyed enough you can get a sneak into what next-gen GPU architectures will bring. In this case, the Wave Matrix Multiply-Accumulate was added to the new GFX11 architecture, GFX11 being the codename of AMD's next-gen RDNA 3-based Radeon RX 7000 series GPUs.

The new Wave Matrix Multiply-Accumulate (WMMA) instruction will operate on matrixes, without Keanu Reeves, rectangular arrays of tables that have numbers. AI (artificial intelligence) and ML (machine learning) algorithms rely on WMMA for large sets of numbers, and it's not the first time that AMD has had an architecture that supports matrix operations, as their CDNA GPU architecture supports this.

The AMD CDNA architecture has an instruction called MFMA (Matrix-Fused-Multiply-Add) which is different to WMMA (Wave Matrix Multiply-Accumulate) in the way of how it addresses the formatting of matrixes supported, and the output formats. Some of the code was posted on AMDGPU which points to WMMA only supporting 16x16x16 matrixes, while it can output in both FP16 and BF16 data formats.

NVIDIA is already well into DLSS 2.x and will unlock more magic from DLSS 3.0, while if you mix in that they're also about to launch their next-gen Ada Lovelace GPU architecture and GeForce RTX 40 series graphics cards... which I'm sure will be ready to rock and roll with updated Tensor Cores and DLSS 3.0 abilities.