Valve designer Lawrence Yang has some advice for Steam Deck owners wanting to swap in 2242 M.2 drives: "Please don't do this." 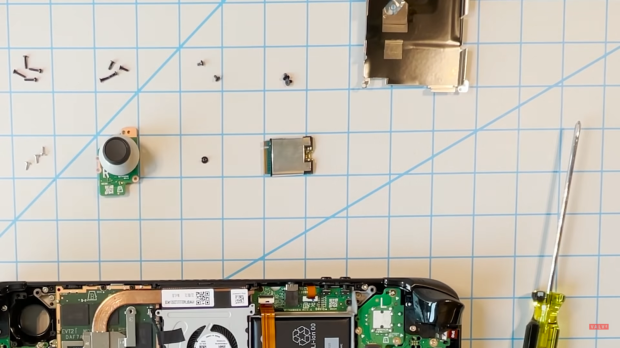 Valve's Steam Deck is technically a PC, and can be taken apart and modded...to a degree. Some mods are dangerous, though, and can significantly shorten the lifespan of the system. Valve has designed the handheld-console PC hybrid in such a way where everything fits perfectly (or as perfectly as can be), with placement affecting overall heat dissipation and component health.

A recent mod showed Steam Deck owners how to use a bracket to swap out the system's built-in M.2 2230 SSDs to a larger 2242 form factor. According to the modder, the "heat spreader bowed a tiny bit," but the system appeared to work fine. Valve's Lawrence Yang chimed in and warned users not go do this because internal component thermals could change as a result of the mods.

"Hi, please don't do this. The charger IC gets very hot and nearby thermal pads should not be moved. In addition, most 2242 m.2 drives draw more power and get hotter than what Deck is designed for. This mod may appear to work but will significantly shorten the life of your Deck," Yang said on Twitter.

This echoes previous warnings from Valve that replacement or swapped SSDs could cause multiple issues with the Steam Deck.

"Please note that before attempting an SSD replacement, an off-the-shelf SSD could cause problems," Valve said in a teardown video from October 2021.

So in short, if you do modify the Steam Deck's internals, be forewarned that things could go very wrong.