Blizzard promised it would make things more clear at its Overwatch 2 reveal event, and the developer did: Overwatch 2 is completely free-to-play, has NO loot boxes, will have a new season every 9 weeks, and Battles Passes are being thrown into the mix. 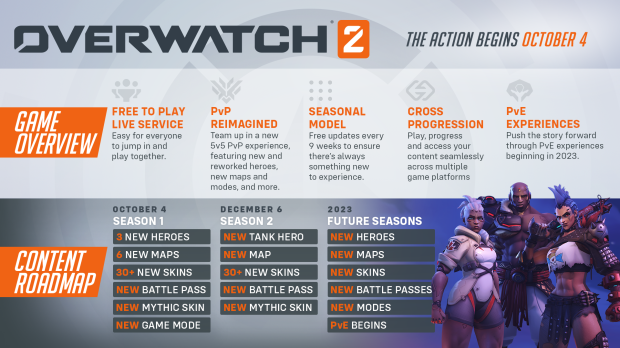 Overwatch 2 will be launching with 3 new heroes -- Sojourn, Junker Queen, and another unknown support hero -- while another big change to the OW roster is the new Battle Pass system. Blizzard will be giving Overwatch 2 players cosmetics (skins, etc), XP boosters, and more with up to 100 levels to unlock.

Season 1 of Overwatch 2 kicks off on October 4, when the game launches, while Season 2 starts 9 weeks later on December 6. There will be 3 new heroes launching with the game, another tank hero with Season 2, and "new heroes" promised for future seasons. A new map and 30+ skins will launch with Season 2, as well as a new Mythic skin.

The future seasons of Overwatch 2 will include new heroes, maps, skins, Battle Passes, modes, and the upcoming PvE will begin. The PvE experience will "push the story forward through PvE experiences beginning in 2023".

Overwatch 2 will go into beta on June 28, where we'll get an early look at what the first season has to offer. It'll be launching in beta form on not just the PCs this time (like Blizzard did with the Overwatch 2 closed beta) but also on the consoles, too.