AMD's new Radeon RX 7000 series GPUs aren't official yet, but Seasonic is jumping the gun with its new wattage calculator... accidentally pre-announcing some of the cards. 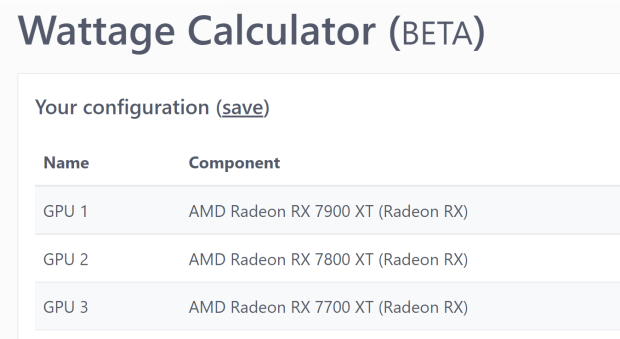 In these estimates, which we're not holding much up to... the Radeon RX 7900 XT requires a 750W PSU for the GPU, and an 850W PSU if you include an 8-core AMD Ryzen CPU. The slightly cut-down Radeon RX 7800 XT will reportedly have the same power supply requirements, while there's 100W less power required for the Radeon RX 7700 XT.

AMD's upcoming RDNA 3-based Radeon RX 7000 series GPUs will be more power efficient than NVIDIA's upcoming Ada Lovelace-powered GeForce RTX 40 series GPUs. NVIDIA will be outlaying its new GPUs with 16-pin power connectors (at least in the FE cards) with power numbers of the cards ranging up to 800W with some rumors.