Russian cosmonaut Sergei Korsakov has shared a remarkable photo from his view through one of the International Space Station (ISS) windows.

The picture shows ice crystals forming in a pattern very reminiscent of the moon on the inside of a window in the space station, though the real moon is nowhere to be seen in the photo. Beneath the formation is an out-of-focus Earth, peeking into the shot. 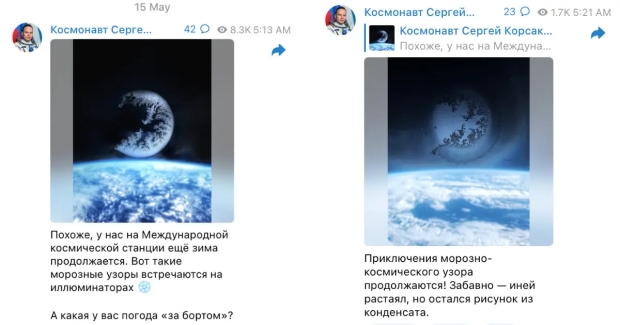 After uploading the original photo to Twitter and Telegram, Korsakov posted a follow-up photo the next day. Korsakov's accompanying caption said, "the adventures of the frosty space pattern continue!" and noted that though "the frost has melted, but the condensation pattern remains."

NASA scientist Andrew Hong has previously said that the space station's "windows are a tremendous heat leak, but astronauts need them for ergonomics and also for their research." Similar to the way car windows frost over, it is plausible that as heat radiates away from the windows, they become cool enough for moisture on the window, perhaps from an astronaut's breath, to then freeze.