A man has reportedly become trapped inside of his Tesla Model Y 2021 after it lost all power and began to randomly catch on fire.

According to reports from CTV News, Jamil Jutha told reporters that on May 20, he was traveling towards Mountain Highway in North Vancouver at 10 am when suddenly his Tesla Model Y lost all power causing the car to come to a stop. Jutha can be heard recounting the events where he said that the Tesla was saying "error" repeatedly and that none of the electronics to any of the doors were working. "The doors wouldn't open. The windows wouldn't go down," said Jutha.

Smoke began to pour into the vehicle's interior and started to suffocate Jutha, who quickly decided his only chance of survival was to break a window to escape. Jutha said that he quickly broke a window, crawled out, and called 911. At the moment, the cause of the fire is known, but firefighters are set to examine the burnt-out vehicle on May 24. Furthermore, Jutha used his burning vehicle as an opportunity to remind all Tesla drivers that there is a mechanical level that opens up the door under the window switch control.

"My car just started going into flames, not flames but it's smoking up, my battery died on my Tesla and I don't know what happened," the driver said.

"I kicked through the window because everything stopped. The power didn't work, the door didn't open, the windows didn't go down...I need to get the f**k out of this car. This is 2021. Brand new, man," said Jutha. 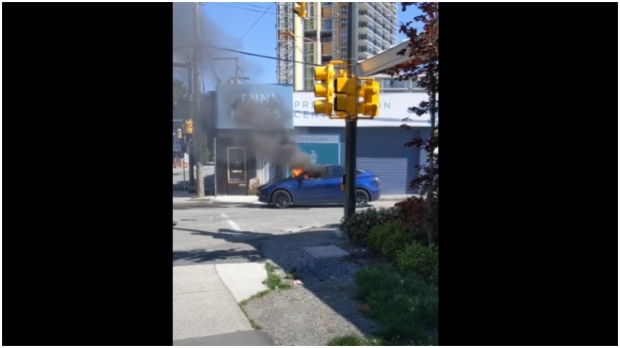