To celebrate Black Hole Week, NASA has shared a fact about the heart of our Milky Way Galaxy and how it has a "leak".

NASA explains that at the heart of our Milky Way galaxy is a supermassive black hole with a mass of 4.1 million Suns called Sagittarius A. In the space agency's blog post, NASA writes that black holes draw in material into what is called an accretion disk. Sometimes when some of the material swirling around the black hole falls inside, it's "swept up into outflowing jets that are collimated by the black hole's powerful magnetic fields. The narrow "searchlight beams" are accompanied by a flood of deadly ionizing radiation."

Gerald Cecil of the University of North Carolina in Chapel Hill was able to prove through multiple wavelength observations that the central black hole is "currently powered down" but can sometimes burp or hiccup out mini-jets when it consumes something large such as a gas cloud or an entire star. NASA explains in the below video that observations from Hubble have revealed that the jet is still pushing feebly into a hydrogen cloud, which causes bubbles that can expand as far as 500 light-years. 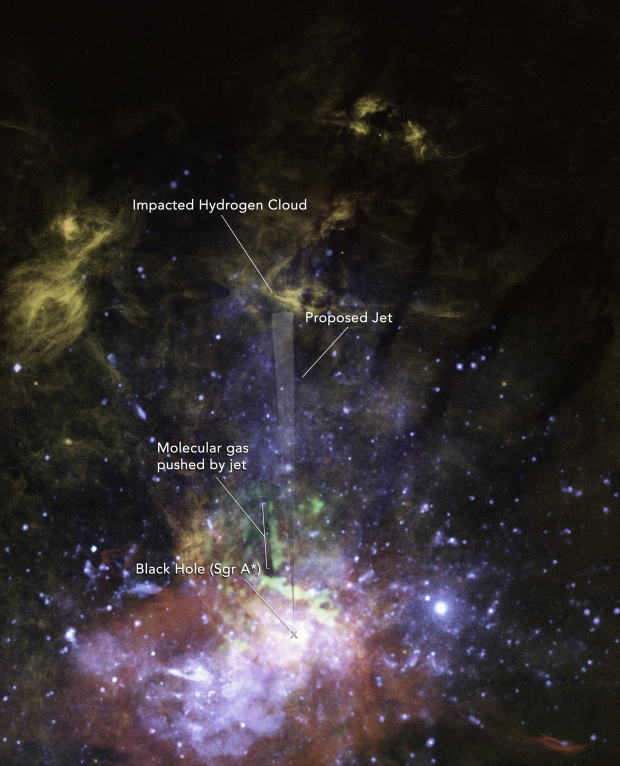