All NewsBusiness, Financial & LegalCases, Cooling & PSUContests & GiveawaysCPU, APU & ChipsetsDealsDisplays & ProjectorsGamingMotherboardsScience, Space & RoboticsStorageVideo CardsVirtual & Augmented Reality
All ReviewsAll ArticlesAudio, Sound & SpeakersCases, Cooling & PSUCPUs, Chipsets & SoCsComputer SystemsDisplays & ProjectorsGamingMotherboardsNetworkingPeripheralsRAMStorageVideo Cards
GuidesGamingAsk the ExpertsNewsletterAboutForums
RTX 3090 TiRTX 4090Diablo 2GTA 6Halo InfiniteElon MuskRTX 3080HDMI 2.1
Connectivity & Communications
Asus has quietly launched two motherboards based on Intel's G35 chipset which relies on Intel's integrated graphics, but this time the graphics engine is somewhat different, as the G35 chipset relies on the GMA X3500. Intel claims that the new graphics engine supports DirectX 10 as well as Shader Model 4.0 and OpenGL 2.0. The G35 chipset is long overdue, but it looks like Intel has finally managed to ship it out to its partners, as the Asus boards have just gone on sale in Japan.

The two models are the P5E-V HDMI and the P5E-VM HDMI, with the main difference between the two being that the first one is ATX while the second one is mATX. Interestingly enough, Asus claims CrossFire support for the full size P5E-V HDMI board and it looks like the design is similar to a P35 board in terms of CrossFire support. Both boards feature an HDMI connector as well as a D-sub for the onboard graphics and an HDMI to DVI converter comes in the box. 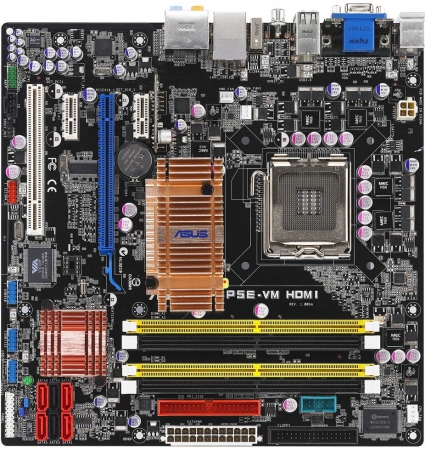 The boards offer support for up to 1,333MHz bus and can take up to 8GB of DDR2 800MHz memory in four DIMM slots. Interestingly enough, Asus has somehow managed to marry the G35 MCH to Intel's ICH9R on both boards, something that Intel didn't intend for the G35 chipset, as it's meant to be paired up with Intel's ICH8-series. The benefits of this aren't great, but you do at least get support for two more USB 2.0 ports as well as command based port multiplier support for SATA.

Both boards packs 7.1-channel HD audio with coaxial S/PDIF out, Gigabit Ethernet, FireWire, six SATA ports and an IDE connector. The P5E-V HDMI has two x16 PCI Express slots, although the second one only has x1 or x4 times bandwidth, a single x1 PCI Express slot and three PCI slots, while the P5E-VM HDMI manages a single PCI Express x16 slot, two x1 slots and a PCI slot. Both boards also has a small riser card which we haven't quite managed to figure out what it's for, nor is there any mention of what it is supposed to be on the Asus website nor in the manual.