I'm one of the biggest Superman fans that you'll ever meet, but it is depressing that there hasn't been a good Superman game... ever. The closest we have is this extraordinary new Superman 'flying game' powered by Epic Games' next-gen Unreal Engine 5 technology. Check it out:

The project was made by a single developer, Tyson Butler-Boshcma, who used the absolutely mind-blowing The Matrix Awakens: An Unreal Engine 5 Experience demo. With the photorealistic Unreal Engine 5-powered The City Awakens demo as its backdrop, entering in Superman and some amazing flying... and it just shows how pathetic Warner Bros. has been -- outright spitting on the Superman franchise, as they have post-Snyder -- at not even attempting at making a new Superman game.

A single developer can impress by throwing in Superman into Unreal Engine 5, with Tyson explaining: "This project was built simply as a test for what a future Superhero game like Superman might be like in a large scale modern city running on UE5. I dream of a modern Superman game and with the release of UE5, seemed like fertile ground for some experimentation with the amazing packages Epic has made available".

"This game uses Epic's The Matrix Awaken's Project City and replaces the character with a flying superhero variant of my own design using other marketplace assets. This was a quick thrown together test, there could be any number of issues and problems, but I am putting it out there for anyone who is keen to give it a go. Also, for legal reasons, this character isn't Superman and I have made sure this is totally free". 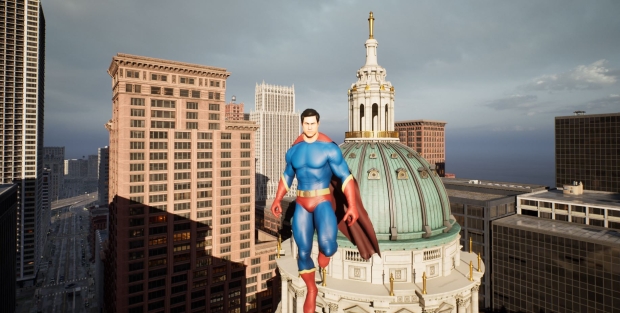