All NewsBusiness, Financial & LegalCases, Cooling & PSUContests & GiveawaysCPU, APU & ChipsetsDealsDisplays & ProjectorsGamingMotherboardsScience, Space & RoboticsStorageVideo CardsVirtual & Augmented Reality
All ReviewsAll ArticlesAudio, Sound & SpeakersCases, Cooling & PSUCPUs, Chipsets & SoCsComputer SystemsDisplays & ProjectorsGamingMotherboardsNetworkingPeripheralsRAMStorageVideo Cards
GuidesGamingAsk the ExpertsNewsletterAboutForums
RTX 3090 TiRTX 4090Diablo 2GTA 6Halo InfiniteElon MuskRTX 3080HDMI 2.1
Gigabyte has announced an upgraded version of the U60 which goes under the name of M704. The design has been cleaned up and all the controls are now on the right hand side of the UMPC. It's still based on a VIA platform, but at least the CPU has been upgraded to a 1.2GHz ULV C7-M. It's still using the same VIA VX-700 chipset with integrated graphics which is a bit of a letdown.

The screen has been improved in two ways, first it has grown by half an inch to a full 7-inches and the resolution is now 1,024x600, up from the rather tiny 800x480 of the U60. The hard drive size has also increased and the M704 will ship with either a 40 or a 60GB 1.8-inch IDE drive. The onboard memory remains the same 768MB of DDR2 533MHz, which should just about be enough, as the M704 ships with Vista Home Premium. 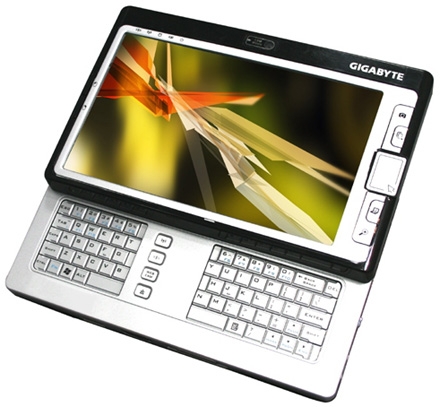 Other features include a built in memory card reader for SD and MMC cards which will also accept SD-IO devices, such as a GPS receiver for example. There's also a built in 1.3Megapixel webcam, 802.11b/g Wi-Fi, two USB 2.0 ports, a mic and a headphone jack, a VGA connector and a docking connector. It does of course have the same type of slide out keyboard as the U60, but it's hard to tell from the picture if it has been improved or not.

The dock is meant to add wired 10/100Mbit Ethernet, but there's no information with regards to the actual dock. The battery is a mere 2-cell 3,900mAh battery, but it's apparently still good for 4h battery life. The M704 measures 190x121x30mm (WxDxH) which makes it slightly fatter than the U60 and it's also 40g heavier at 780g, which isn't exactly heavy.

You can find the product spec page here
Newsletter Subscription