On Monday, a flight carrying 132 people nose-dived towards the surface of Earth in Tengxian county in southwestern China. 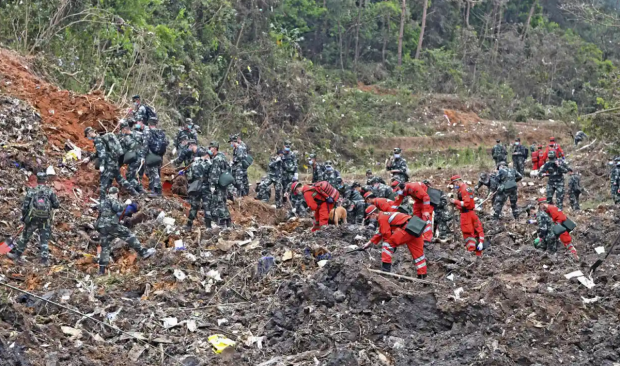 The flight was identified as China Eastern Airlines flight MU5735, and the nose-dive was captured on video by a CCTV camera and a car dash-cam. The crash has marked the worst air disaster for China in nearly 30 decades as authorities were unable to identify any survivors at the wreckage. Now, Chinese authorities are saying that investigators are facing "a very high level of difficulty" in figuring out what caused the plane to nose-dive.

Zhu Tao, director of aviation safety at the Civil Aviation Administration of China (CAAC), said on Tuesday, "The jet was seriously damaged during the crash, and investigations will face a very high level of difficulty." Adding, "Given the information currently available, we still do not have a clear assessment of the cause for the crash." Tao also added that the plane met all "airworthiness standards before taking off", and that during its descent, the pilots didn't respond to calls from air controllers.

According to FlightRadar24 data, MU5735 descended nearly 26,000 feet in around 2 minutes, and while it headed towards the ground, it was traveling so fast that parts of the plane were being torn off. US Federal Aviation Administration investigator Michael Daniel has previously worked on cases where planes have nose-dived into the ground and suggested that for MU5735, "foul play" took place.

Daniel noted that during the descent, the plane had power, which "rules out a catastrophic type of failure".

"Even with catastrophic failures, a lot of times you'll see some opportunity for declaring an emergency, or mayday or, or something along those lines. There's nothing that's been released here that indicates any kind of distress call," said Daniel.