As you can see from the picture below, it looks as if the GZ-X4 will come in two colour schemes, red/black and black/silver. Our only concern here is the matter of finding matching red optical drives, looks like a custom paint job will be in order, unless Gigabyte themselves steps up to the challenge. The GZ-X4 comes with front mounted connectors for two USB ports, a FireWire and two 3.5mm jacks for headphones and a mic. 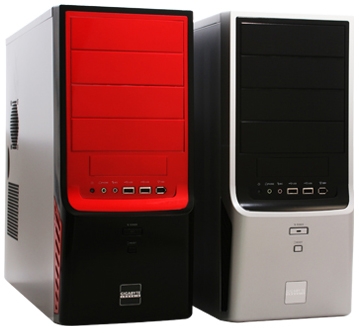 The GZ-X5 comes in either black or silver/black and has the same setup of connectors, but they're hidden behind a flap at the bottom of the case. Both models can take a 120mm fan both in the front and the rear and have four 5.25-inch drive bays, but this is the only thing they have in common. The GZ-X4 feature one external 3.5-inch bay and six internal, while the GZ-X5 has two external and five internal ones.

The GZ-X4 measures 185x410x500mm (WxHxD) and weighs 5.2kg due to its steel construction. The GZ-X5 is slightly smaller at 185x410x480mm (WxHxD) and weighs 5kg. Internally the cases appear similar to the original 3D Aurora, but it has a different kind of locking clasps for the drives. We're not sure when they'll be available, but it seems like Gigabyte should have them very shortly according to its website.