The horror mavens at Supermassive Games have revealed The Quarry, the latest thriller in their macabre video games lineup.

Like all good 80's splatter flicks, Supermassive's new game The Quarry has a simple premise: A bunch of kids try to survive the night at a spooky campground where all hell breaks loose. It looks like a fun romp that includes some of the most well-known horror alums in the business like David Arquette of Scream fame, Lance Henriksen, Ted Raimi, Lin Shaye, and even Sarah Palmer herself Grace Zabriskie.

Similar to Until Dawn, Supermassive's breakout success game, The Quarry is a cinematic experience where everything you do (and say) has a repercussion later on in the game. Players inadvertently choose who lives and who dies as nine camp counselors are killed off in what we can only imagine is creatively disturbing ways. It's like an interactive Friday the 13th choose-your-own-peril adventure game. 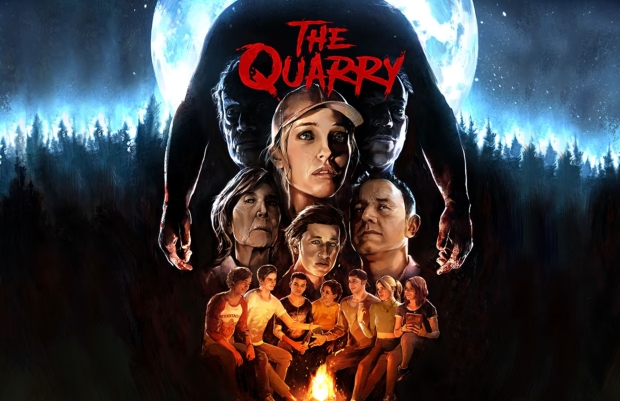 Here's a copy of the press release:

2K and Supermassive Games today announced The Quarry, an all-new teen-horror narrative game where your every choice, big or small, shapes your story and determines who lives to tell the tale. Featuring an iconic ensemble cast of Hollywood stars and celebrities, including David Arquette ("Scream" franchise), Ariel Winter ("Modern Family"), Justice Smith ("Jurassic World"), Brenda Song ("Dollface"), Lance Henriksen ("Aliens"), Lin Shaye ("A Nightmare on Elm Street"), and more, The Quarry is launching on June 10, 2022, and will be available on PlayStation®5, PlayStation®4, Xbox Series X|S, Xbox One and Windows PC via Steam. Rated M for Mature by the ESRB, The Quarry is now available for pre-order.

As the sun sets on the last day of summer camp, the teenage counselors of Hackett's Quarry throw a party to celebrate. No kids. No adults. No rules.

Things quickly take a turn for the worse.

Hunted by blood-drenched locals and something far more sinister, the teens' party plans unravel into an unpredictable night of horror. Friendly banter and flirtations give way to life-or-death decisions, as relationships build or break under the strain of unimaginable choices.

Play as each of the nine camp counselors in a thrilling cinematic tale, where every choice shapes your unique story from a tangled web of possibilities. Any character can be the star of the show - or die before daylight comes. How will your story unfold?

As part of today's announcement, 2K and Supermassive Games released the official announcement trailer for The Quarry, which showcases the incredible visual fidelity and cinematic quality achieved in the game while presenting a first look at the star-studded cast featured in the game.

"The Quarry is breaking new ground across interactive storytelling and technology to create a truly visceral teen-horror experience," stated Director Will Byles.

"I can't wait to see the choices you make, who you'll save, and who you're willing to sacrifice!"

"As an interactive narrative experience, The Quarry is a completely different type of game from anything 2K has published in the past," stated David Ismailer, President at 2K.

"We are partnering because Supermassive Games are simply the best at what they do, and we're huge fans of the studio. The chance to work with one of the great creative minds in our industry doesn't come often, and we are excited to be on this journey together with The Quarry."

Key features for The Quarry include: