The Sun's chaotic behavior has resulted in eruptions being blasted towards Earth's general direction, which will cause geomagnetic storms into Earth's upper atmosphere, according to officials. 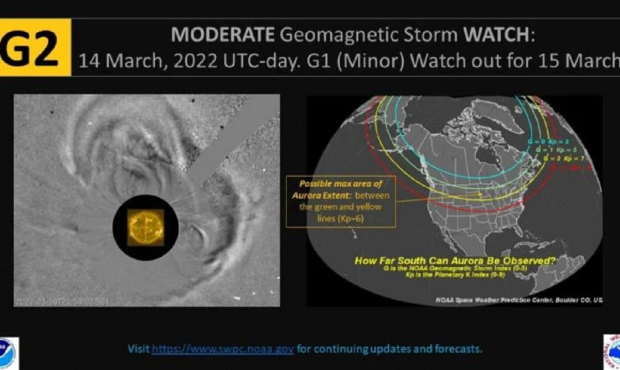 Since mid-January, the Sun has been very active with coronal mass ejections (CME) and solar flares, and due to this activity, it was only a matter of time before some charged particles were flung in Earth's direction. Officials at the Space Weather Prediction Center of the US National Oceanic and Atmospheric Administration (NOAA) have confirmed that for the next few days, there are warnings in place for mild/moderate levels of geomagnetic storms measuring in at categories G1 and G2.

These warnings aren't anything to worry about on the surface of Earth, as our planet's protective layers protect us from the majority of the harmful particles, but they are very relevant for satellites as geomagnetic storms can cause interruptions in communications. On a more positive note, the British Met Office has said that as a result of two CMEs directed towards Earth, there is an increased chance of both aurora borealis and aurora australis over March 13 and 14.

"There is a chance of enhancements to the auroral oval at times during 13th and 14th March as a result of two Coronal Mass Ejections (CMEs) and a coronal hole high speed stream arriving at Earth," said the British Met Office