Halo Infinite's campaign co-op won't be available at the start of season 2. 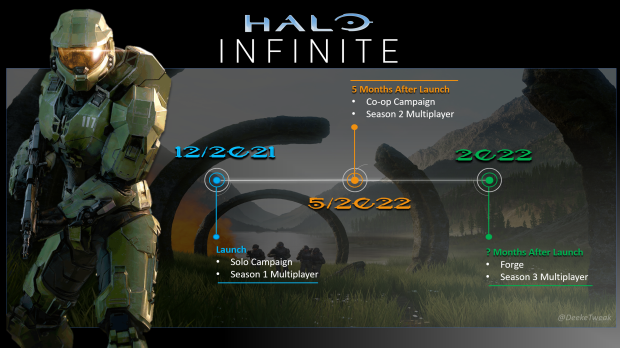 343i has finally announced new details on Halo Infinite's upcoming features, including co-op, forge, season 2, and bug fixes. 343i can't fix everything at once, and the studio has a prioritization hierarchy that looks like this:

Co-op isn't at the very top of the list, and there's a lot involved to get co-op running on five separate Xbox consoles. The studio says Halo Infinite's online/split-screen campaign co-op play will not be available when Season 2 begins on May 3.

Campaign co-op is still planned to release during season 2.

"The reality is that it's going to take more time to land a high-quality, full-featured 4-player network co-op experience in the massive, wide-open world of Halo Infinite," 343i's Joe Staten said in a recent update.

"We're also committed to a great 2-player split-screen co-op experience on all Xbox consoles, from the original Xbox One through Xbox Series X-and the non-linear, wide-open sections of the Campaign present some big challenges for split-screen that have taken us more time to solve."

"All this means that we will not be able to ship Campaign network co-op on May 3rd, at the start of Season 2,"

"But we are still aiming to deliver Campaign network co-op later in Season 2, and we will share a release date for that and for split-screen co-op as soon as we can."