An employee that was working at a local electricity company has photographed a rare phenomenon described as "light pillars". 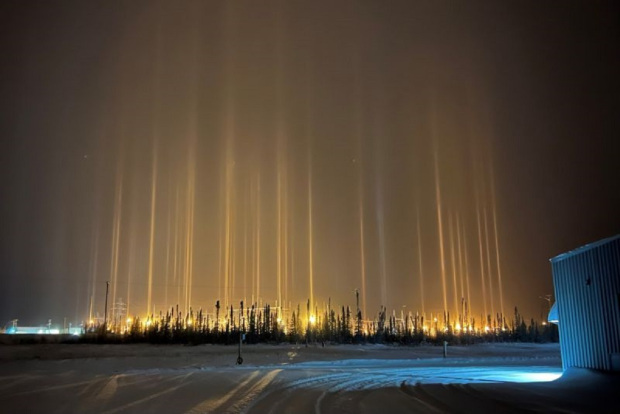 The photograph was taken by Mark Matwick, who is employed at the Keewatinohk Converter Station in the Canadian province of Manitoba. Matwick works at Manitoba Hydro, the operator of the electricity company, posted the photograph to its Linkedin account explaining the phenomenon. According to Manitoba Hydro, these mysterious beams of light are called "light pillars" and aren't "aliens descending", but occur "on a cold night without wind, the ice crystals that form in the atmosphere can act as a mirror and reflect the light source below."

In response to the photograph being posted on LinkedIn, Justin Anderson, an adept northern lights photographer and also one of the founders of the Manitoba Aurora and Astronomy Facebook page, spoke to CTV News Winnipeg and said that Matwick's image was "probably one of the best photos of light pillars I've ever seen." The full-time northern lights photographer backed up the explanation from Manitoba Hydro, saying, "It will reflect that light upwards into the atmosphere and it'll go hundreds of feet," he said. "It looks like hundreds of feet for us, but really it's going miles in the air and it looks incredible."