A study of the black holes titled "The Unanticipated Phenomenology of the Blazar PKS 2131-021: A Unique Supermassive Black Hole Binary Candidate" has been published in the journal The Astrophysical Journal Letters. 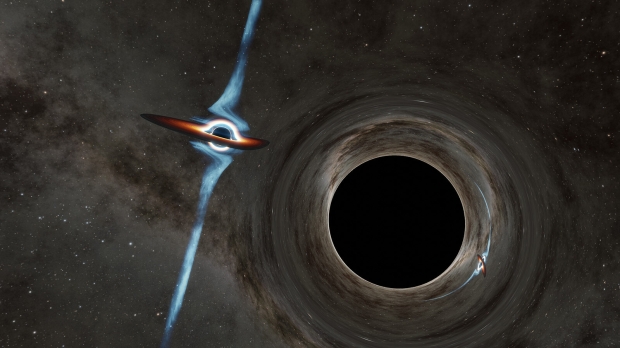 Researchers from the California Institute of Technology (Caltech) have observed two supermassive black holes orbiting one another every two years, nine billion light-years away. Both are hundreds of millions of times greater in mass than our Sun and are separated by about fifty times the distance between our Sun and Pluto. They are predicted to merge in approximately ten thousand years, which will send massive gravitational waves across the universe.

PKS 2131-021 was detected through changes in its radio-light brightness dating back 45 years, resulting from the black holes within orbiting one another. The combination of radio data from five different observatories yielded a nearly perfect sinusoidal light curve, indicating that PKS 2131-021 comprised not one but two supermassive black holes.

"We knew this beautiful sine wave had to be telling us something important about the system. Roger's [Blandford] model shows us that it is simply the orbital motion that does this. Before Roger worked it out, nobody had figured out that a binary with a relativistic jet would have a light curve that looked like this," said Tony Readhead, Robinson Professor of Astronomy, Emeritus.