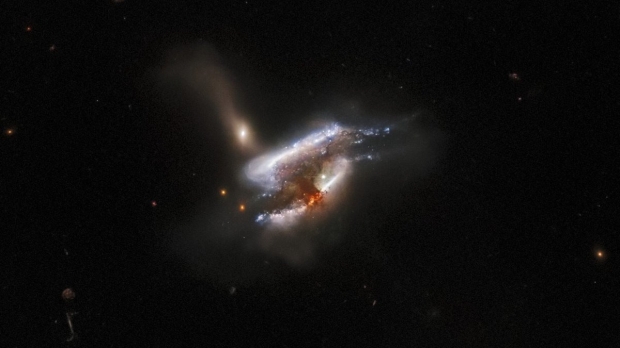 IC 2431 is found 681 million light-years from Earth in the constellation Cancer and appears to be a triple galaxy merger in progress, though a thick cloud of dust somewhat obstructs the view of the center. The image was taken by Hubble's Advanced Camera for Surveys (ACS) and targeted the IC 2431 merger identified by the Galaxy Zoo citizen science project.

The original Galaxy Zoo project consisted of more than 100,000 volunteers and classified 900,000 unexamined galaxies and was the largest galaxy census ever conducted. The project achieved a year's worth of work for a professional astronomer in 175 days and has since led to a consistent stream of similar astronomical citizen science projects.

The Milky Way has also undergone its own mergers, absorbing other galaxies since it formed around 13 billion years ago. In about 4.5 billion years, it is expected to merge with the Andromeda galaxy, another member of the Local Group.

You can view and download the full-resolution image here.