AMD is going from stride to stride right now, where the company has proudly announced it has had a huge 68% increase in annual revenue for FY 2021 -- while Q4 2021 revenues beat analyst expectations. 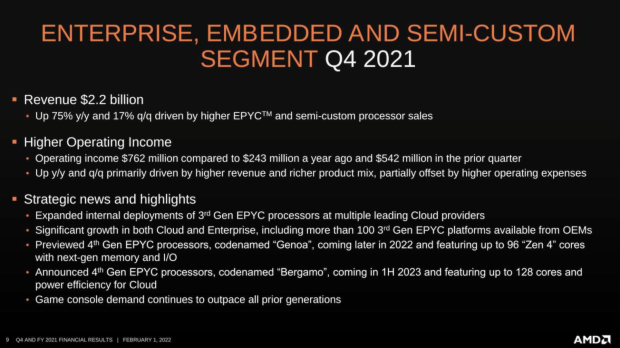 This is thanks to higher revenue and richer product mix, while AMD has been expanding the internal deployments of its new 3rd Gen EPYC processors, with AMD EPYC processors now powering more Cloud-based providers. AMD has also teased its next-gen 4th Gen EPYC "Genoa" processors that will drop later this year... especially with the monster 96 "Zen 4" cores and next-gen memory + I/O.

AMD also announced its new 4th Gen EPYC "Bergamo" CPU which has up to 128 cores (up from the 96 cores on EPYC "Genoa") and it'll drop in 1H 2023. Not only that, but AMD was also very proud of "game console demand continues to outpace all prior generations".