All NewsBusiness, Financial & LegalCases, Cooling & PSUContests & GiveawaysCPU, APU & ChipsetsDealsDisplays & ProjectorsGamingMotherboardsScience, Space & RoboticsStorageVideo CardsVirtual & Augmented Reality
All ReviewsAll ArticlesAudio, Sound & SpeakersCases, Cooling & PSUCPUs, Chipsets & SoCsComputer SystemsDisplays & ProjectorsGamingMotherboardsNetworkingPeripheralsRAMStorageVideo Cards
GuidesGamingAsk the ExpertsNewsletterAboutForums
RTX 3090 TiRTX 4090Diablo 2GTA 6Halo InfiniteElon MuskRTX 3080HDMI 2.1
It seems like the cat is out of the bag as someone on a Taiwanese forum seems to have already got hold of Gigabyte's upcoming GA-780SLI-DS5 motherboard and has kindly posted a picture of the board. It looks like rather a nice board as well with support for three-way SLI among its features. Besides the three x16 slots, Gigabyte has squeezed in a single x1 PCI Express slot and two PCI slots, but neither can be used if you've got three double width cards in the board.

It seems to feature a similar I/O layout as Gigabyte's X38 boards, but it's really too hard to see from the picture, but it looks as if it has dual Gigabit Ethernet and FireWire, as well as a serial port as oddly as it might seem. There are also six USB 2.0 ports and 7.1-channel audio outputs around the back. The addition of a Gigabyte SATA controller at the back of the board suggests eSATA, but we can't be sure about this. 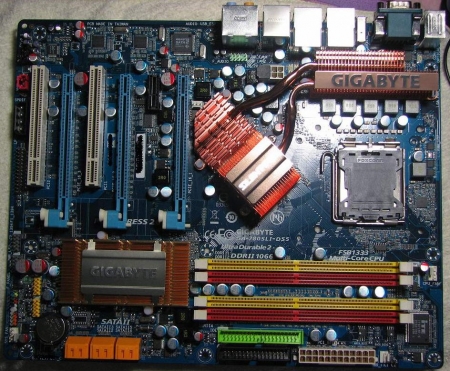 As this is a DS5 board it won't have all the features of Gigabyte's high-end DQ6 range, hence the smaller heatpipe cooling solution, although it has a rather interesting shape suggesting that the earlier reports about the N200 PCI Express 2.0 controller is indeed the real deal. Other features include a six SATA connectors, a single IDE connector, a further four USB 2.0 ports via two headers, a parallel port header and a FireWire header.

Maybe not the most exciting board ever, but it's definitely a sign that the Nvidia 780i chipset, or 680i plus N200 isn't too far away. The question is, will the RD790 launch first?
Newsletter Subscription