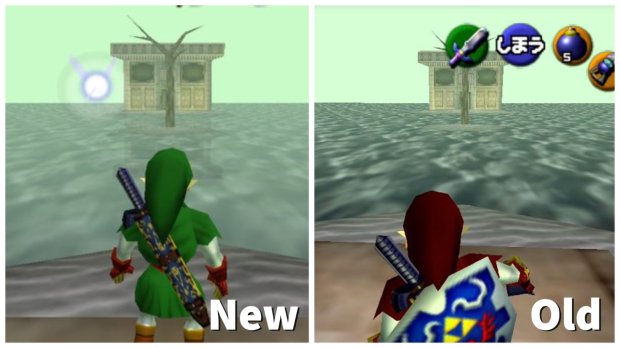 Some Nintendo 64 games don't look so great on the Switch. The company is charging $50 a year for its new Switch Online + Expansion Pack subscription tier that comes with wonky emulation for specific games. Ocarina of Time, one of the best N64 games ever made, is a game that sometimes looks better on the original 1996 console than it does on Switch.

Sadly, Nintendo hasn't entirely fixed these issues...however there have been some adjustments since launch. Ocarina of Time's Switch N64 version is still missing the more enhanced reflection and fog effects that are used in the original N64 release, which are also seen in the GameCube and Wii VC versions. A Tweet from code tinkerer OatmealDome indicated that the OOT could've been fixed on the Switch; the infamous Water Temple has been adjusted to make the water more clear. Reflections have also been added, but they're not as extensive as the original version's reflections.

But follow-up Tweets from Zeth Ryder reveal stark differences between the Switch and classic versions.

However, dataminer LuigiBlood says Nintendo did adjust N64 emulation, possibly to clean up the code and clear any unused data and content. The Ocarina of Time adjustments were made on an emulation level, Luigi says.

Nintendo has yet to officially acknowledge these issues, and other problems still remain in games like Paper Mario and Banjo-Kazooie.