The new study was published in the journal Proceedings of the National Academy of Sciences, entitled the "The rise and fall of rationality in language." 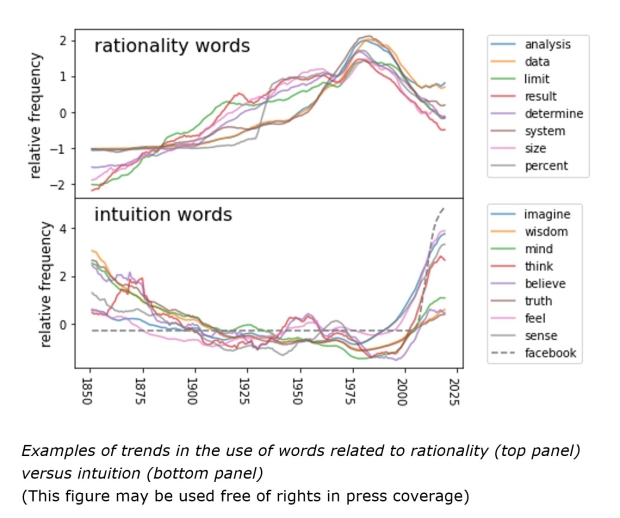 Researchers from Wageningen University and Research (WUR) and Indiana University analyzed the language from millions of books. They identified trends in using words associated with rationality and intuition. They found words associated with reasoning such as "determine" and "conclusion" rose in relative frequency from the 1850s, while the use of more experiential terms such as "feel" and "believe" fell.

They also found that this trend has reversed in the last forty years and has been accompanied by a shift from collectivist language to individualist, shown through the ratio of singular to plural pronouns used, such as "I" and "we."

"Interpreting this synchronous sea-change in book language remains challenging. However, as we show, the nature of this reversal occurs in fiction as well as non-fiction. Moreover, we observe the same pattern of change between sentiment and rationality flag words in New York Times articles, suggesting that it is not an artifact of the book corpora we analyzed," said co-author Johan Bollen of Indiana University.

As seen in the graphs above, the authors note that the rise of social media around 2007 accelerated the shift from fact-related language to more emotionally-laden language.

"Whatever the drivers, our results suggest that the post-truth phenomenon is linked to a historical seesaw in the balance between our two fundamental modes of thinking: Reasoning versus intuition. If true, it may well be impossible to reverse the sea change we signal. Instead, societies may need to find a new balance, explicitly recognizing the importance of intuition and emotion, while at the same time making best use of the much needed power of rationality and science to deal with topics in their full complexity," said study co-author Ingrid van de Leemput from WUR.

Rationality: What It Is, Why It Seems Scarce, Why It Matters