NASA has announced that its Perseverance rover and operating team are facing a challenge that they have never faced before.

The space agency took to its blog and social channels to announce that Perseverance recently captured its sixth Mars sample, but during the "Coring Bit Dropoff", the transferring period of the bit that contains the sample to the rover's storage section, the rover sensors detected an anomaly. According to NASA's blog post, as soon as the rover detected the anomaly, it halted all proceeding until further instructions from its team were provided.

After acquiring all relevant data on the anomaly, NASA's Perseverance team identified the problem by taking images of inside the rover's carousel. The images showed a few pieces of pebble-sized debris that the Perseverance team is confident came the most recently sampled Mars rock sample. NASA writes that these debris fell out of the sample tube at the time of the Coring Bit Dropoff, which is now preventing the sample from being correctly placed in the carousel.

The designers of the bit carousel did take into consideration the ability to continue to successfully operate with debris. However, this is the first time we are doing a debris removal and we want to take whatever time is necessary to ensure these pebbles exit in a controlled and orderly fashion. We are going to continue to evaluate our data sets over the weekend.

This is not the first curve Mars has thrown at us - just the latest. One thing we've found is that when the engineering challenge is hundreds of millions of miles away (Mars is currently 215 million miles from Earth), it pays to take your time and be thorough. We are going to do that here. So that when we do hit the un-paved Martian road again, Perseverance sample collection is also ready to roll, writes NASA. 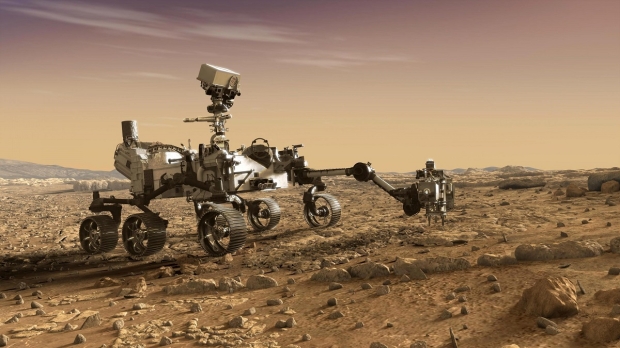