All NewsBusiness, Financial & LegalCases, Cooling & PSUContests & GiveawaysCPU, APU & ChipsetsDealsDisplays & ProjectorsGamingMotherboardsScience, Space & RoboticsStorageVideo CardsVirtual & Augmented Reality
All ReviewsAll ArticlesAudio, Sound & SpeakersCases, Cooling & PSUCPUs, Chipsets & SoCsComputer SystemsDisplays & ProjectorsGamingMotherboardsNetworkingPeripheralsRAMStorageVideo Cards
GuidesGamingAsk the ExpertsNewsletterAboutForums
RTX 3090 TiRTX 4090Diablo 2GTA 6Halo InfiniteElon MuskRTX 3080HDMI 2.1
Although AMD announced its HyperFlash technology some time ago, no products have appeared as yet and it looks like we'll have to wait for the SB700 south bridge before anything will happen in terms of real products. The reason for this is because some new features had to be added to support HyperFlash, something that couldn't be strapped onto the SB600.

HyperFlash uses an open standard and AMD doesn't charge any royalty fees, unlike Intel with its Turbo Memory technology which has proven to be more expensive than upgrading the system memory which in many cases seems to have a better overall effect. HyperFlash will come in three different sizes, 512MB and 1 and 2GB. 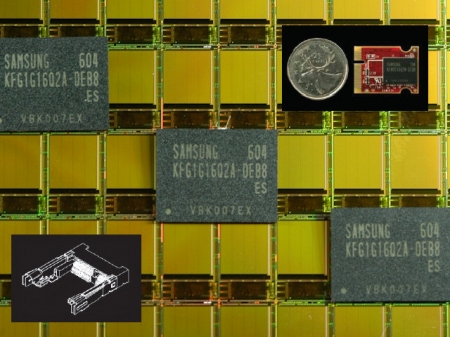 The question still remains to be answered if AMD's HyperFlash will bring any benefit for systems with more than 1GB of system memory, as Turbo Memory has little to no effect on such a system. You can find some more information about Samsung's OneNAND memory here
Newsletter Subscription