Intel is preparing for a big fight in the GPU market in 2022, but the real fun -- and the gloves come off -- in 2023 when the company launches its next-next-gen DG3 "Battlemage" GPU. 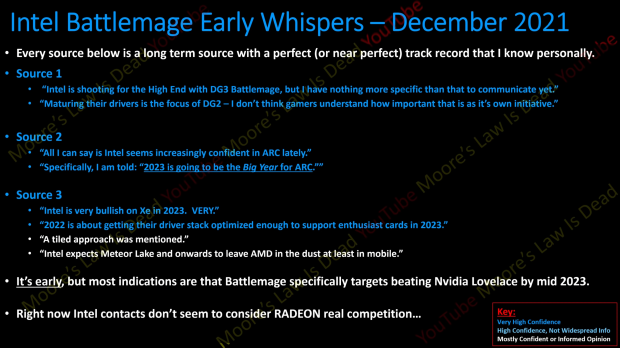 In some fresh new rumors from Tom @ Moore's Law is Dead, Intel's next-gen DG3 Battlemage series of GPUs codenamed "Elasti" are going to be monsters. MLID's sources have said that Intel's new DG3 Battlemage GPU will be taking the good fight to both AMD and NVIDIA in the high-end flagship graphics card market, but we've got a year+ to wait for that.

We only heard about Intel's codename "Elasti" GPU a few days ago, but between now and then we'll have the launch of the Intel Xe-HPG "Arc Alchemist" GPUs in 2022, which will be followed by the Intel Xe2-HPG "Arc Battlemage" GPU in 2023 before we see the likes of Intel Xe3-HPG "Arc Celestial" in 2024+ while Intel Xe Next "Arc Druid" and Intel Xe Next Next "Arc Elasti" will probably launch in 2025 and 2026, respectively.

MLID's first source said that: "Intel is shooting for the High End with DG3 Battlemage, but I have nothing more specific than that to communicate yet. Maturing their drivers is the focus of DG2 - I don't think gamers understand how important that is as it's own initiative".

The second source that spoke with MLID added: "all I can say is Intel seems increasingly confident in Arc lately. Specifically, I am told: '2023 is going to be the Big Year for Arc'".

The third and final source that Tom spoke to teased: "Intel is very bullish on Xe in 2023. VERY. 2022 is about getting their driver stack optimized enough to support enthusiast cards in 2023". Then there are a couple of "mostly confident or informed opinion" tags on the following teases about Intel's next-gen DG3 "Battlemage" GPU.

First off, the third source added that "a tiled approach was mentioned" and that "Intel expects Meteor Lake and onwards to leave AMD in the dust at least in mobile. Right now Intel contacts don't seem to consider RADEON real competition...".