All NewsBusiness, Financial & LegalCases, Cooling & PSUContests & GiveawaysCPU, APU & ChipsetsDealsDisplays & ProjectorsGamingMotherboardsScience, Space & RoboticsStorageVideo CardsVirtual & Augmented Reality
All ReviewsAll ArticlesAudio, Sound & SpeakersCases, Cooling & PSUCPUs, Chipsets & SoCsComputer SystemsDisplays & ProjectorsGamingMotherboardsNetworkingPeripheralsRAMStorageVideo Cards
GuidesGamingAsk the ExpertsNewsletterAboutForums
RTX 3090 TiRTX 4090Diablo 2GTA 6Halo InfiniteElon MuskRTX 3080HDMI 2.1
Pictures of MSI's upcoming RD790, or as it's now known AMD 790FX chipset based K9A2 Platinum motherboard has appeared online. Although we saw this board as far back as Computex in June this year, it still hasn't launched. AMD is holding back on the chipset launch and MSI isn't the only manufacturer that's ready as soon as AMD gives the word. We know that several of the big manufacturers are just waiting for the launch, so at least there should be plenty of boards available when we get there.

Onto the board, which has no less than four PCI Express 2.0 x16 slots, one x1 PCI Express slot and two PCI slots. The second pair of connectors only works if the board is switched to four x8 mode, which means all of the slots have x8 bandwidth. Of course you can't use all of them at once unless you use single slot graphics cards. It's got a different kind of Circu-Pipe heatpipe cooling solution than MSI's Intel based boards and this could well be because the AMD 780FX chipset doesn't run that hot. 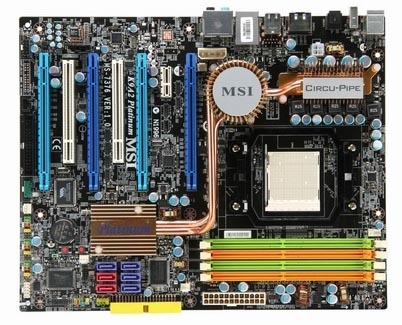 Now it's just a matter of waiting for AMD to launch the chipset. More here
Newsletter Subscription