Xbox gaming will soon be integrated in the metaverse in some way, but not for a long time.

The metaverse is happening. First Facebook changed itself to Meta and is using Oculus VR as a portal to the new platform. Now Microsoft is jumping in and it's bringing Xbox into the new frontier. Today Microsoft announced plans to integrate its productivity software with Mesh, a platform that allows users to meet up with one another virtually with avatar representations. Mesh is now available for Teams, which allows users to show an avatar of themselves in video chats. Users can also project holographic images of themselves to others for a more realistic presence.

"Yeah, absolutely, you should expect to see this expand into gaming]. The way I think of it...we're a platform company and we always build the core intrinsics first and then build it into our first-party applications. So you absolutely can expect us to do things in gaming."

"If you take Halo as a game, it is a metaverse. Minecraft is a metaverse and so is Flight Sim. In some sense they are 2D today, but the question is 'can you now take that to a full 3D world?' We absolutely plan to do so." 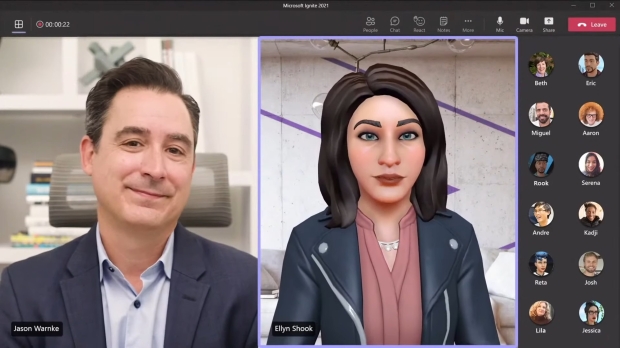 How will it do that? Right now it's all theoretical. The only proof-of-concept Microsoft has shown so far is the Teams Mesh functionality, which is calls "omni-experiences."

There's a lot of buzzwords flying around right now. Omni-experiences, metaverse, holoprojection...it's kind of like a sci-fi novel.

It's likely that holographic projection via the HoloLens 2 (or another lower-cost consumer headset) or third-party VR headsets are the main gateway for Xbox metaverse experiences. Microsoft is creating a platform and may not actually create its own dedicated hardware to accompany its gaming metaverse ambitions--at least for a while.

Nadella confirms that Xbox avatars can already be used with its Mesh program. Users can appear as their Xbox avatars in meetings in Mesh Teams.

The CEO goes on to say that Mesh is all about connecting people during a time where everyone is still indoors and working from home.

"If you think about it you have your real presence in video today and then you have your holographic presence, and then the avatars are an intermediary in the middle. I think there's a place for it in all of these things."

"It's all about creating more presence, more human connection."