On October 28, the Sun blasted out an X-1 solar flare causing a coronal mass ejection of charged particles to be launched directly towards Earth.

The X1 classification for this solar flare is the most intense classification that is given to solar flares, and while the flare itself reached Earth only 8.5 minutes after it happened, the resulting coronal mass ejection (CME) is expected to arrive on October 30. While the large swath of charged radiation particles impacting Earth poses no danger to humans on the surface, the interaction in Earth's upper atmosphere can cause geomagnetic storms that can interfere with satellites, radio communications, GPS, and more.

According to NOAA's Space Weather Prediction Center, there is a G3 (strong) geomagnetic storm watch scheduled for October 30. Looking back into what past solar flares have caused on Earth, this specific classification of solar flare has caused auroras to appear in the sky over certain parts of the planet. These auroras are similar to the Northern/Southern lights and can be seen with the naked eye. NASA recommends people who live in Northern US and Canada to keep an eye out for a possible light show that will coincide with Halloween. 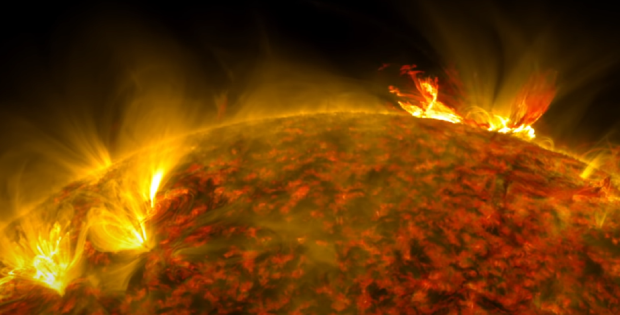