I still remember owning the Nokia 6310 and it being the defacto indestructible phone, but did you know it has been 20 years since its release, and now Nokia is re-releasing the Nokia 6310 to celebrate the anniversary.

The new Nokia 6310 has some upgrades under the hood for 2021, with a new color display, rear camera, and then we've got access to news channels and radio stations. Nokia has thankfully retained the look of the 6310, but includes an upgraded larger curved display, and those same weeks-between-charges battery life.

Nokia's new 6310 is available in two colors: yellow, and black while inside we have 16MB of RAM, 8MB of internal storage (LOL) and 32GB microSD card supply. These specs sound so pathetically low, but that is what is inside the Nokia 6310 alongside the Unisoc 6531F processor and S30+ operating system.

Nokia explains: "The new Nokia 6310 has taken the iconic shape of the original Nokia 6310 and has reimagined it for 2021, with a host of new features including bigger buttons, zoomed in menus, a radio and more. The days of squinting at your phone are over - Nokia 6310 comes with new zoomed in menus and larger font options, to provide even better readability".

"Accessibility mode can automatically configure to a one-icon view, increase font size further and increase volume to maximum - all on a phone set-up they probably already know and love". 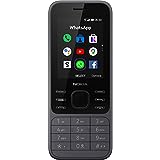