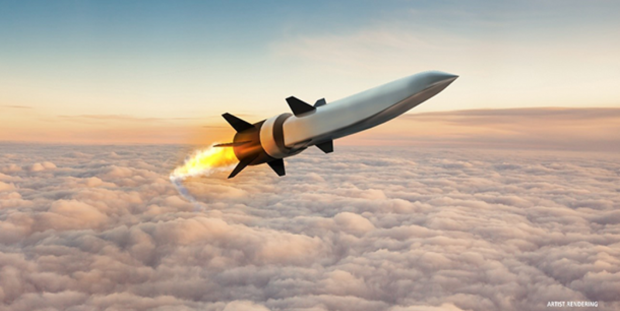 DARPA, along with the U.S. Air Force, conducted a successful test flight of the Hypersonic Air-breathing Weapon Concept (HAWC). The new weapon concept is a missile that is released from an aircraft; the difference between HAWC and traditional missiles is that HAWC's engine compresses incoming air that has been mixed with hydrocarbon fuel.

HAWC's engines then ignite the mixture of fast-flowing air and hydrocarbon fuel, creating an explosive amount of thrust that causes HAWC to travel five times greater than the speed of sound (Mach 5). DARPA states in its announcement that the missile operates best in "oxygen-rich" atmospheres and that the success of the test flight is a demonstration that a hypersonic missile could strike a target much more quickly than subsonic missiles.

Andrew "Tippy" Knoedler, HAWC program manager in DARPA's Tactical Technology Office, said, "The HAWC free flight test was a successful demonstration of the capabilities that will make hypersonic cruise missiles a highly effective tool for our warfighters. This brings us one step closer to transitioning HAWC to a program of record that offers next generation capability to the U.S. military."

Adding, "HAWC's successful free flight test is the culmination of years of successful government and industry partnership, where a single, purpose-driven team accomplished an extremely challenging goal through intense collaboration. This historic flight would not have been possible without the dedication of industry, U.S. Air Force, and Navy flight test personnel who persevered through the pandemic to make the magic happen."