Astronomers are constantly learning new and wonderful things about the planets in our solar system, and Saturn is in today's spotlight.

Researchers used data acquired by NASA and the ESA's Cassini mission that orbited Saturn between 2004 and 2017. With the data, researchers set out to study the core of the planet and found that it may not have been as solid as astronomers previously estimated. The team of astronomers from the California Institute of Technology (Caltech) found that the core is better described as a "diffuse soup of ice, rock, and metallic fluids".

Jim Fuller, assistant professor of theoretical astrophysics at Caltech and co-author on the study, said, "We used Saturn's rings like a giant seismograph to measure oscillations inside the planet. This is the first time we've been able to seismically probe the structure of a gas giant planet, and the results were pretty surprising."

Additionally, the astronomers found that the sludgy core slightly oscillates, which causes the entire planet to jiggle or quake. This planetary quaking causes gravitational waves that cause particles in Saturn's rings to wiggle.

"Saturn is always quaking, but it's subtle. The planet's surface moves about a meter every one to two hours like a slowly rippling lake. Like a seismograph, the rings pick up the gravity disturbances, and the ring particles start to wiggle around," says Mankovich. 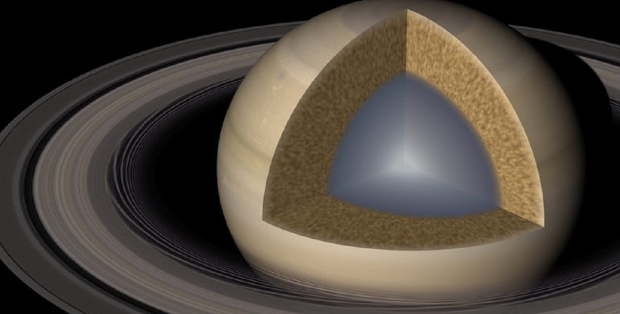